Start a Wiki
Μηλινοη
Melinoe won the God/Goddess of the Month Poll competition for August 2012. 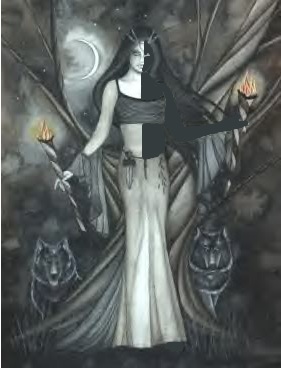 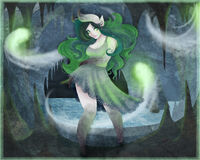 Melinoe was a frightful underworld Goddess who presided over the propitiations offered to the ghosts of the dead. She wandered the earth at night with a retinue of ghosts, striking fear into the hearts of mankind. Her limbs were black one one side of her body and white on the other, revealing her dual chthonian and heavenly aspects. 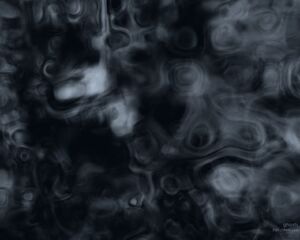 The word meilia, which forms the first part of her name, was often used to describe propitiatory offerings made to the ghosts of the dead. 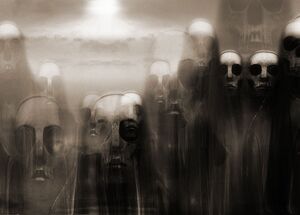 Melinoe is a strange goddess, and her appearance is frightening. Her left side is black and hardened like a mummy, to represent her father, the dark god of the Underworld, Hades. Her right side is pale and chalky as if she were drained of all her blood, to show the bright Persephone, her mother. She wears a golden dress and a golden shawl, and her eyes are empty black voids. However seeing her in this form is unlikely, being the goddess of ghosts, she can appear as whomever she wants, haunting people in their nightmares and in person if ever directly confronted. The illusion is so strong that even when normal, her immediate victims still see her as the ghost.

Melinoe can take on the appearance of the dead people in a person's life, using guilt and anger from the person as an ally or as an advantage in battle. She then uses this to destroy them.

Retrieved from "https://camphalfbloodroleplay.fandom.com/wiki/Melinoe?oldid=1335871"
Community content is available under CC-BY-SA unless otherwise noted.