Michael was born 16 years ago to Circe and Kyle Carter. Kyle had assumed that his affair with Circe wasn’t anything serious until he found a cradle by his doorstep holding two little babies, a girl and a boy. Although he had no idea how to care for a child, much less two of them, he couldn’t bring himself to abandon them so he took them in, naming the girl Rachel and the boy Michael. The twins’ father told them early on of their origin so while they were growing up, they weren’t surprised by monsters and other things. He helped them train with their powers inherited from Circe so they could protect themselves. He also gave them each a celestial bronze weapon. When the children were 14, their father was taken from them in a car accident. They were sent to an orphanage but they hated it there. They vaguely remembered a place their father talked about, a Camp of some sort for people like them. So after doing some investigating they got a location. They left the orphanage and traveled to Camp. Along their journey, they were attacked by various monster, which they easily fought off with their sorcery. This caught the attention of their mother, Circe, who needed a job done and saw them fit to do it. She sent them to an island in the Sea of Monsters where a gem was hidden. She had enchanted it but it had somehow been stolen. The twins went there to find the gem but instead encountered a Hydra. They knew of the monster but were never told how to kill it. After many attempts of cutting off the heads, the twins were overwhelmed. The Hydra spit at them, acid landing on Michael’s chest and some landing on Rachel’s face. The pain was intense and he passed out. Rachel, believing he was dead, fled the island. Apollo, taking pity on Michael turned him into a Light Spirit and restored his body to proper health. Michael became a helper to Apollo, and he was taught how to heal wounds and how to play music. One day while he was playing music for some nymphs, they said his skills rival those of Apollo himself. Apollo became jealous and cast him out on his own. Michael grew to hate him after this incident and all the gods too. He made his way back to Camp Half-Blood but it wasn’t the same. He didn’t view the gods the way the campers did. He overheard some of the campers talking about a Broken Covenant and decided he would fit in better there. 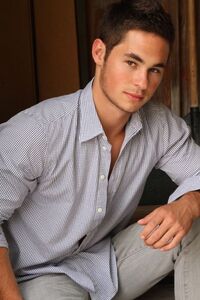 Michael has blue-green eyes and light brown hair. He stands at 6’0”, taller than his twin, and has an athletic build. He was turned into a light spirit when he was 16 so he looks around that age.==Personality==

Michael is cold to strangers at first. When he decides someone is an ally, he warms up to them. Other that he is cold and sarcastic.

Michael uses a simple bow and arrow. He received it from his dad before he died.

1. He is able to turn into pure light for a short time and while in this state, is granted flight and is immune to all attacks; however, once he changes back, he will be extremely drained and immobile for a long time.


2. He can unleash a quick burst of light which blinds anyone that was focused on him for a short time.
3. He can bend light around himself, concealing them for a short time.
4. He has the ability to conjure weapons and objects out of pure light which can be used for combat; however, only one weapon can be conjured at a time and it cannot be bigger than him.
5. He has the ability to create temporary light sources, similar to concept of a flare, which will alight an area for a short time.
6. They are stronger during the light of day.
7. They are weaker in the darkness of night.
8. They cannot be blinded by bright lights.

Rachel Carter - Sister, love her more than anything in the world

Retrieved from "https://camphalfbloodroleplay.fandom.com/wiki/Michael_Carter?oldid=1633576"
Community content is available under CC-BY-SA unless otherwise noted.