Start a Wiki
Μνημοσυνη
Mnemosyne won the God/Goddess of the Month Poll competition for February 2012. 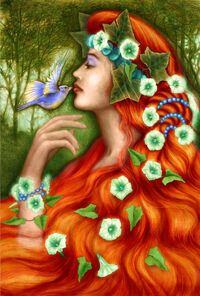 Mnemosyne was Titan goddess of memory and remembrance and the inventress of language and words. She was the daughter of Gaia and Ouranos and the mother of the Muses by Zeus. 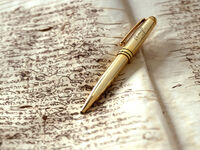 As a Titan daughter of Ouranos (Heaven), Mnemosyne was also a goddess of time. She represented the rote memorization required, before the introduction of writing, to preserve the stories of history and sagas of myth. In this role she was represented as the mother of the Muses, originally patron goddesses of the poets of the oral tradition. Kings and poets receive their powers of authoritative speech from their possession of Mnemosyne and their special relationship with the Muses.

After she and Zeus slept together for nine consecutive nights and thereby created the nine Muses:

She also presided over a pool in Hades, counterpart to the river Lethe. Dead souls drank from Lethe so they would not remember their past lives when reincarnated. Initiates of the Mysteries were encouraged to drink from the river Mnemosyne when they died, instead of Lethe.

Finally she was a minor oracular goddess like her sister-Titans. She presided over the underground oracle of Trophonius in Boeotia were those was wished to consult the oracle were made to drink alternately from two springs called "Lethe" and "Mnemosyne". Mnemosyne's Roman counterpart is Moneta.

Retrieved from "https://camphalfbloodroleplay.fandom.com/wiki/Mnemosyne?oldid=1570776"
Community content is available under CC-BY-SA unless otherwise noted.