Start a Wiki
Μορφέας
Morpheus won the God/Goddess of the Month Poll competition for April 2012 and October 2014. 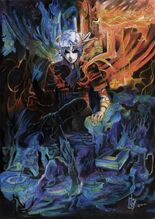 Morpheus (Μορφέας in Ancient Greek ) is the god of dreams and the son of Hypnos and Pasithea. In some myths he is the son of Hades. Iris is his suspected wife. He is also known as "The Shaper". His symbols are a closed eye and a dark crown. Mortals call him the Sandman. Morpheus is described as a man in a long black coat, he does not cast a shadow (even at midday) and shimmered as he moved like a mirage. His face cannot be made out, as it would keep shifting.

Retrieved from "https://camphalfbloodroleplay.fandom.com/wiki/Morpheus?oldid=1569584"
Community content is available under CC-BY-SA unless otherwise noted.