Noah Azid @N.Azid Follows you I use to be aquaman but now I'm your local citizen. Don't bother me and we'll be cool. Camp Half-Blood Joined April 2020 925Following 725Followers

Noah isn't a happy person and you can tell. Moody, depressed, Noah doesn't really have any motivation to wake up in the morning. Could you blame him? Noah feels as if he lost everything and doesn't have a strong direction in life. Even a new world like camp halfblood isn't enough to spur him on. He wanted to be great. Make his mother proud. And that didn't happen. He was just a disappointment. Which is a feeling that follows him around constantly. Every time he meets someone, he has the thought when will you be disappointed in me? running through his head. Hard to trust, Noah has a thick skin and the Trojan walls built around his heart, believing that no one really has his best interests at heart.

Noah is dedicated, though, with a one track mind. If he sees a goal, no matter how ambitious, he'll put his mind to it without anyone being able to distract him. His true love is swimming, which is fitting for a son of Poseidon, no? However, due to his past, he's found it difficult to get back into it, projecting his own feelings of guilt and shame onto the activity. It's as if whenever he touches water, he's just reminded of what he did wrong. Noah, though a man of few words, is sensitive and is constantly thinking about his own actions. Which meant that when he exploded two years before, the feeling of shame never truly left him. Noah struggles to forgive himself.

Noah's use to being the odd one out. A lone wolf, he's learnt how to be satisfied with his own company and pretends he doesn't need people to keep himself happy and entertained. He's not likely to ask for help and lets his own internal emotion build until he can't control himself from exploding. Like his father often can be, Noah can be like a storm that can rage destruction until there's nothing left to destroy. In short, Noah is a good person. He just doesn't know how to deal with his emotions and figure out how to navigate life.

Nadia Azid was a second generation immigrant who had watched the world with wary eyes. Having been in New York during 9/11, she's experienced how the world shift, how cruel people can be, how a community can change over a day. Nadia once worked in airport security, of all places, but soon found herself without a job and losing all hope. Her parents were old, having had Nadia late in life due to fertility issues, and Nadia had their medical bills to pay. So she jumped from job to job, desperate for any chances people gave her, despite her own pride suffering as a result. Her only escape was the water, travelling from beach to beach. She aimed for early in the morning when there were little to no people to bother her. It was here that she met Poseidon. Handsome, kind, considerate and loved the ocean as much as she did. Of course, he didn't tell her who he was. It wasn't anything serious on either side. Nadia couldn't marry him. She was already engaged to a family friend by this point. To be married within a month. But Nadia had fallen into infatuation-quickly and without a care. They saw each other here and there until she got married. 8 months later: she was giving birth to Noah. Naturally, she lied and said he was a premature baby and the husband believed her well enough, not knowing enough about babies and pregnancy to dispute it. Of course, the midwife knew different but she kept her mouth shut. Nadia insisted on naming him Noah rather than a traditional Islamic name. Because Noah was the name of his father-or so she thought.

They didn't have much between them but they had enough to give Noah a roof over his head and food on his plate. Like his parents, Noah flocked to the water, learning how to swim by the age of three. Nadia put him through swimming school, driving him to every practise every single day. She wanted him to have a future. A future she didn't have herself. The stepfather was almost a dead beat dad save for not leaving. He went to work, watched television when he came home, then went to bed, rarely acknowledging either his wife or his son (or so he believed). Which suited Nadia well enough. Noah was hers. Not theirs. By eight, Noah was winning swimming competitions for both his age range and the range above him. Anyone could tell Noah had a bright future in front of him. No matter his religion, no one could deny that. When he was nine years old, he was attacked in his back yard by a fire breathing horse. Not knowing what to do, Noah just stood there screaming. And then suddenly he was being showered by golden dust with his step father staring down at him. Although the cat was out of the bag, the step father kept it to himself. He was a son of Hermes and his own birth had been something similar. Not as if either of them wanted to be married in the first place. The step father taught Noah how to fight, giving him a celestial bronze dagger. With the one condition he didn't tell his mother the truth. Over the years, he was attacked by a few other monsters but with his step father's training, he was able to fight them off. Either through dumb luck or by running away. Once, he was helped by a satyr who offered to take him to camp. But, once again, he denied.

His swimming abilities landed him a scholarship to a private school. Which Nadia was overjoyed about. His stepfather had asked him if he wanted to go to camp during the summer but he said no, preferring to stay with his family during the summer and go on holidays interstate. The private school was, understandably, full of rich kids who often singled him out for looking 'other'. As kids normally did. He was the new boy in town that could barely afford the uniform. An easy target. The one person who did give him a chance was the swimming coach, who did see potential. Whilst he refused to admit it, he believed Noah was the guy that could get into the olympics. Meanwhile, by the time he was 16, Noah was becoming closer to the other top competitor in the team. Lachlan. At first, it was hanging out after swim meets, then it grew into the weekends. Sharing rooms on swim camps. Of course, they were falling in love and soon fell into a relationship. A secret one, of course.

However, the need to be the best reared its ugly head. Both were getting top scores, and when they were seventeen, they got into the Olympic trial swim meets. If they won this, they could get into the Olympic team. Noah would have come second. If he didn't lose to Lachlan-who had pulled on his ankle half way through the swim. Lachlan was the underdog and everyone was shocked that Noah had lost. Unable to prove Lachlan sabotaged him, Noah lost-everything. He didn't have any money to fall back onto like Lachlan did. He'd have to wait another three years to get his next chance. Noah was angry, bitter, heartbroken. Which erupted later that month when he found Lachlan making fun of Noah with his friends. Noah jumped him. He blacked out and was told he couldn't stop hitting him. This ended with Noah being charged aggravated assault and two years in juvenile detention.

When Noah got out, his dreams were crushed. His parents refused to see him. With nothing left going for him, Noah headed to camp halfblood that he once refused nine years before. 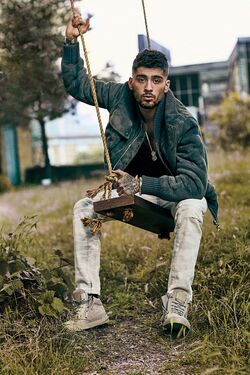 Retrieved from "https://camphalfbloodroleplay.fandom.com/wiki/Noah_Azid?oldid=1806105"
Community content is available under CC-BY-SA unless otherwise noted.