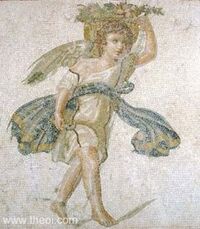 Notus is the South Wind, one of the four Anemoi. He was the wet, storm-bringing wind of late summer and early autumn. Notos dwelt in Aithiopia, the southernmost realm in the geography of myth.

Notus' winds are heavy and moisture filled, creating fog and mists. His Roman counterpart is Auster. Notus like Eurus is not featured very prominently in mythology as Zephyrus and Boreas are.

Retrieved from "https://camphalfbloodroleplay.fandom.com/wiki/Notus?oldid=596535"
Community content is available under CC-BY-SA unless otherwise noted.