This character belongs to DrXax

He is normally pretty serious and a bit shy when he is with strangers, when he is with his friends, he is really cool and out-going. He is an excellent leader, and is able to take all people's ideas, not just his. He is very short-tempered, any little leak of emotion, and he will start yelling of anger.

Parents Meeting: Helen was a beautiful young journalist in "Mysteries". She would always look for things that weren't at all normal, such as unusual bright light stripes in the sky at midday. She even made a full article about them, but nobody seemed to see them. She was criticized as a liar. Little did she know, that those stripes were Apollo's chariot, in other words, Helen could see through the mist. One day, Apollo, after watching her amazement and curiosity, went to visit her, disguised as a extra-normal stuff geek, he presented himself as Andrew. They got to know each other, and fell in love. She was amazed by him, since he could also see those light stripes. They dated for some time, and Andrew finally invited her to a really formal restaurant. She drank too much wine, and ended with Andrew in the bed doing "it".

When she got the news that she was pregnant, she told Andrew immediately, but he just disappeared "mysteriously" (as Helen liked it) at the next day. She tried to forget about it, but she would still continue to be a journalist, and watch as the stripes flew through the sky. One day, when she was asleep, she had a dream:

"Hi, Helen, I'm Andrew, or should I say Apollo? Yes, I'm Apollo, god of music, poetry, healing, light etc. etc. Which means, the lights you see in the sky, are really my chariot, never stop looking at them, they will bring you hope. Our son, will be a demigod, which comes with great power, but great danger as well, may monsters will attack him. I don't know if you'll believe me, but please do. Take care of him and give him these two gifts I got for m when the time is right." He showed two wristbands, one red and one gold. "He'll just need to rip them off, and a different weapon will activate for each of them. They're just for protection. When the attacks happen, you must send him to Camp Half-Blood in Long Island, there, he will train and become stronger. Please trust me Helen, I love you. Remember our light."And with that, the dream ended.Helen woke up with cold sweat on her forehead, and with one wristband in each hand. She named her son November, since that's the month when she met Andrew.

Early Childhood: November had a happy childhood. He would play around with his friends, and make up some incredible stories to imagine, and play with those stories's as a base. His mom would always read him at night, everyday, even though he would grow up, Helen would choose more complex books from time to time. He hated reading, but loved writing.

He also loved music, when he was 5, he started to play the piano. When he was 7, he played the violin, and when 8, the guitar. He started to compose his own songs, they were short, but happy. When he was 9, he entered a junior-high story contest, and surprisingly, he won.  He wasn't really smart at school, but he loved all types of literature.

First Monster Attack: When he was 11, Helen gave him the two wristbands, she told him how to use them, and when to use them. One unfortunate day, with 12 years, while walking with Helen toward the grocery store, a small hellhound came toward him. "Rip off the wristbands now!!" Helen screamed. He did as ordered, and a crossbow appeared in his left hand, and a sword in his right one. The dog pounded on him, but he got to shoot an arrow, barely hitting the hellhound on the shoulder. He got up as fast as he could and stabbed the hellhound with the sword in the neck, and it  turned into dust.

Since Helen saw, how November could "easily"(not really) kill monsters, she decided to still keep him home, for as long as she could. The next year, when he was 13, a Fire Breathing Horse attacked him, but this time, he got to kill it, but with major gashes and burns. When Helen saw him, she was really worried, so she took him to the hospital. He stayed there over th night, and in the morning when he woke up, Helen was amazed, most of the gashes had healed, and the burns were extremely lower, probably a blessing from Apollo, or even his own involuntary powers. Helen told him to pack, so he did so and the next day in the morning, they went toward camp.

Helen drove him to camp, and he stayed there year-round, but then he started to feel sad, and homesick, so he returned home. Since he had trained much, he was better with his weapons. When he returned, Helen had packed everything to move to Austin TX. They moved, and when he got there, when he was 15, a harpie attacked him. He got to kill her by shooting a first arrow to her left wing, and then, while she fell from the sky, an arrow in the chest.

He started being popular in the school because of his looks which he didn't like. His only true friend was Kirk Kent, a kind of geek, but really cool, and a bit shy. He had another attack at 16, but this time, a giant scorpion. I got to kill it, by cutting the tail first, and then impaling the sword in its head.

Then, his life changed, an English girl named Aria came to school. They would hang out together, and they became best friends. But one day when he was still sixteen, when he was walking in the streets with Aria, two harpies came, and both of the fought like a pre-made team. They got to kill them both easily. Then they talked and discovered that each were demigods. He then told her about camp and she suddenly fainted. He carried her toward her house (mansion, which wasn't that far) with help of Kirk, who was casually in the way home and lay her in her bed. November talked with Sean, Aria's stepfather, and a friend of his and he explained Aria's nature of being a demigod, and told him about camp. When Aria woke up, Sean had agreed for her to go to camp.

They went off in an airplane, and when they were in Long Island, they took a cab all the way through a mlie from camp, so the taxi driver wouldn't be suspicious. They walked until they found an empousa, and killed her, but she left him a gash in his upper arm. After that, they got to camp, and November was claimed as a son of Apollo. 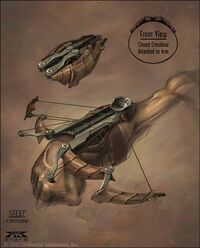 One handed crossbow in left hand, and a one handed sword on the right hand. (Both CB)

Add a photo to this gallery
,
Retrieved from "https://camphalfbloodroleplay.fandom.com/wiki/November_Stark?oldid=1717349"
Community content is available under CC-BY-SA unless otherwise noted.