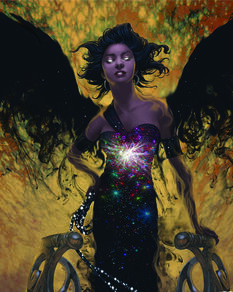 NYX was the goddess of the night, one of the ancient Protogenoi (first-born elemental gods).

In Greek mythology, Nyx is the personification of darkness. In particular night. Nyx was born directly from the void of Chaos, and was the one of the first Protogenoi. She was married to Erebus (Primordial God of Depth) who is also her brother and had many children with him. She is an incredibly powerful divine being, as she was a Protogenoi, and has four siblings: Gaia, Phusis, Erebus, and Tartarus.

A myth that supports her power is when Hypnos, the minor god of sleep and her son, fled Zeus because he put him to sleep on Hera's orders, so she could give great misfortune onto Hercules. Zeus found out about his involvement and chased him. Hypnos fled to his mother Nyx whom Zeus obviously feared as he held his anger at bay, not wishing to offend Nyx. Another myth is that Nyx's daughter, Hemera (day) left Tartarus when Nyx entered it, creating night and day.

According to some Greek articles Chaos did not exist and Nyx, in fact, was the first divine Entity, promoting her power and importance even more. Her son Moros (Doom) is mysterious as well, and is believed to be omniscient, omnipresent, and omnipotent, as he drives all things to their ends. One example is that Zeus cannot defeat her, another being that the Moirae (Fates) serve him.

Nyx is the Greek word for night. This goddess had many cults around Ancient Greece and Rome but she had more cults than Temples. Nyx had many priests who worshiped in her name, all her followers worshiped at night in complete darkness. The Night Mother had two major cults in Antient Greece; these were Megara located in Megaris (Southern Greece) and one in Rome the Capital City of the Roman Empire.

In Roman mythology Nox is the goddess of night and darkness and sometimes associated with witchcraft. 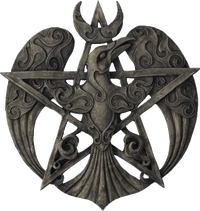 Evey day, Nyx was residing in her home all day long, taking care of her fifteen dark spirited children, among them Hypnos (the sleep) and Thanatos (the death). By the evening, Nyx was leaving her home to set off for her nightly jouney. On her way she met Hemera, the Day, who was returning home from her daily trip and they were greeting each other peacefully. When she flew across the sky bringing darkness she would leave a trail of glitterling stars that would disappear once she would return to her Mansion of Night

She was depicted as riding in a chariot, trailing stars and bringing the night, and accompanied by Her sons Hypnos and Thanatos. She could be helpful or harmful to mankind, bringing either sleep or death. Nyx had prophetic powers, and gave oracles from a cave. She was older and more powerful than Zeus, who deferred to Her wishes.

Nyx is a very neutral goddess much like the night itself. She can be quite melancholic to some extent but Nyx can also be brutal and harsh. She is often described by mortals or demi-gods who have viewed her as beautiful and kind though like the darkness, Nyx doesn't always make her motives known. There are a lot of mixed views on this ancient goddess, some say she's sly and quick to anger and others say that's just the nature of a protogenoi, wise beyond mortal years.

Nyx was described as a churning figure of ash and smoke, as big as the Athena Parthenos statue, but very much alive. Her dress was void black, mixed with the colors of a space nebula, as if galaxies were being born in her bodice. Her face was hard to see except for the pinpoints of her eyes, which shone like quasars. When her wings beat, waves of darkness rolled over the cliffs. She rode in on a chariot that was made out of Stygian Iron pulled by two massive horses that were black except for their silver fangs. Their legs floated in the abyss turning from solid to smoke as they moved.

She is an extremely powerful goddess, being one of the Protogenoi. She is so powerful and terrifying, that many Giants and Titans fear her.

Retrieved from "https://camphalfbloodroleplay.fandom.com/wiki/Nyx?oldid=1597123"
Community content is available under CC-BY-SA unless otherwise noted.