Start a Wiki
Ουρανός
This page is only informational and is to be treated as such. Please do not make any roleplays on this page. 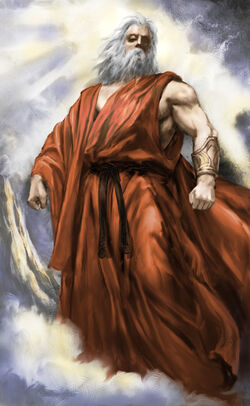 Ouranos (in Greek, Οὐρανός) is the Greek protogenos personifying the Sky. Ouranos', the Greek word for sky (a cognate of the English word air), Latinized form is Uranus. He is the husband of Gaia alone. He was the first ruler of the universe until overthrown and castrated by his son, Kronos. Ouranos could be the greatest villain in Greek mythology, even being worse than Kronos but maybe not as bad as Gaia since she is his wife.

Ouranus and Gaia were the gods of the sky and the Earth respectively. They became partners, and brought forth their children: the Cyclopes, the Hecatonchires and the Titans.

Ouranos didn't care for his children, in fact, he hated them. Most of all he hated his children that did not look normal, such as the Hecatonchires and Cyclopes. They were unsightly in his opinion, and he wanted them gone. But he couldn't kill them, because they were immortal. So instead Ouranos threw the Hecatonchires and Cyclopes into Tartarus and positioned Kampê to guard them. This caused Gaia pain, and she was also furious because they were her children, and Ouranos cared nothing for them. She asked her children, the Titans, to get rid of Ouranos so she could save her other children, and only Kronos was brave enough to do it. He took a flint sickle Gaia made, and castrated his father. Nothing else was mentioned about Ouranus after that.

Other accounts stated that Ouranos swallowed the Titans because the oracle said that one of his children will overthrown him. Gaia gave Oranos a rock and he thought it was Kronos. Unknowingly, Gaia hid Kronos. When he grew up, Kronos cut Ouranos's genitals using the sickle and his genitals became Aphrodite and his ichor became monsters.

Kronos threw Ouranos' remains into the ocean. Aphrodite, the goddess of love and beauty, was born from the foam. It is also said that Ouranos' ichor became The Furies.

As Ouranus is the Titan of the Sky, he presumably is able to control the weather.

He presumably has the standard powers of a god.

Retrieved from "https://camphalfbloodroleplay.fandom.com/wiki/Ouranos?oldid=1335898"
Community content is available under CC-BY-SA unless otherwise noted.