Patroclus 'Rocky' Forrester @rockydmonkey Follows you Son of Dionysus • Life Of The Party • Rebellious Reveller 🍇
Red cups and sweaty bodies everywhere. Hands in the air like we don't care.

Almost always lively and enthusiastic, Rocky has a talent for getting a crowd going. As a son of Dionysus, he is very fond of parties and social gatherings, and he often uses his infectious energy to make the people around him effervescent and vivacious, which is why he was often labeled as the ‘life of the party’ by his peers. A naturally happy young man, Rocky always tries to see the good in everything, and his optimism and positive attitude is off the charts — although sometimes this does lead him to disappointing situations, he does not dwell on them for very long, and instead transforms them into learning experiences, and moves on with his life.

As one would most likely assume, Rocky is also very adventurous, and can be quite mischievous as well, often getting into trouble with the authorities for the all the schemes and pranks he cooks up He’s not afraid of anything, and is willing to experience new things, no matter how crazy they are in theory: like eating weird and exotic food, or partaking in dangerous activities like cliff-diving. He can be sort of a daredevil that way.

In the romance department, Rocky can be considered as quite the ‘slut’, or more appropriately, a ‘man-whore’. He likes sleeping around, and as a pansexual person, he has a lot of options, aside from the fact that he’s not a picky person either. If he feels like doing it, he will find a way to do it. And yes, he does feel it a lot, sometimes more than once a day, hah.

Allison Forrester, as intelligent as she was beautiful, was a clear-sighted mortal that captured the heart of the wine god Dionysus. A prodigy in archaeology, she decided to bring her talent from her homeland of America, to the Hellenic country of Greece, and worked as a mythology expert for a museum in Athens. Her experiences with her clear sight has led her to have a distinct fascination with the ancient lores of Greece, and the world where the gods live in, and in a way, this is also what attracted an Olympian to her. Not too long after she had moved from across the Atlantic, the god Dionysus appeared before her, as a seemingly faultless museum visitor who asked her on a date just after their first conversation with each other. Charmed, Allison agreed, and the rest was history.

As someone who was gifted with the sight, it was easier for Allison to believe and accept the truth the Dionysus had presented her — that he truly was a divine being, and that he had to leave. Compared to other mortal parents, Allison was well-prepared, and she knew what to do, and where to bring her son when the time came. As a parting gift, Dionysus left her a map that would lead them to Camp Half-Blood, a drachma and instructions on how to summon the Chariot of Damnation (aka the Gray Sisters’ Taxi), as well as a celestial bronze sword, for protection, all of which were stowed in a chest hidden underneath Allison’s bed. After nine months since their first meeting, she gave birth to a healthy baby boy, a bundle of joy that she would call Patroclus, named after one of her favorite characters from the Iliad. A month after that, she moved back to America, figuring it would be easier to raise her son there, in New York City rather than in a foregin country, and in closer proximity to Camp.

Growing up, Rocky — as he insisted to be called — had a great childhood, mostly because his mother did her best to support him in any way that she can. She had the same job from before, but in a different museum, this time somewhere in Manhattan, and she made just enough money to pay out all their finances and live comfortably. She also did extensive research about monsters that could possibly start attacking her son, and kept the celestial bronze sword close to her at all times, just in case. As for Rocky, he went to a regular public school, made lots of friends, and was, for the most part, unaware of his true heritage as a demigod. It did help him enjoy his early life though, as he grew up to be a very vivacious and lively young man.

His first monster attack came when he was 12, in the middle of a hot summer night. It was a harpy that broke through Rocky’s bedroom window. Shocked, the young boy fled to his mother’s bedroom, who used the celestial bronze sword to slay the monster, who, for the most part, had a hard time moving through the narrow hallways of the low-ceilinged apartment. Allison, while not an expert at fighting monsters, did take some sword fighting lessons to prepare her for this exact moment. Aided by her clear sight, she was able to defend her son. But deep in her gut, she knew she cannot do it forever, and eventually, will have to deliver Rocky to Camp Half-Blood. And so, she told the young boy everything about his true heritage.

After learning about the mythological mess he was in, Rocky was still able to continue his life normally, for the most part. He inherited his mother’s love for the lores of Greece, and it wasn’t too hard for him to adjust. If anything, it made him more aware, and he did not let his guard down easily after that first attack, enabling him to feel more secure about himself, and thus, live life like how he originally planned to. As expected, he was able to finish middle school and the first three years of high school with only one other attack — a Hellhound that he managed to evade and lost in the dirty alleyways of the concrete jungle. It was a scary experience, no doubt, but as a healthy young man, he had fast reflexes and quick wits that allowed him to outrun and escape the single monster.

Rocky finished high school satisfactorily — he had lots of friends, he was popular, and he did pretty well academically. It was a mostly happy occasion, and his mother was so proud of him. Graduation Day, however, did not go as well as he pictured it in his mind. Attracted to the scent of a demigod, a Cyclops wreaked havoc in the middle of the ceremony. Having left the sword at home, Allison panicked, and quickly grabbed Rocky as they both fled from the scene. Always prepared, though, she had the drachma that Dionysus left her all those years ago, as well as the instructions that came with it. Together, they summoned the Gray Sisters’ Taxi and journeyed to Camp Half-Blood. The mother and son parted ways at the base of Half-Blood Hill — Allison confident that her son will do just fine, and Rocky excited for the things to come. His plans to go to college may have been dashed, but he’s always been an optimist, and he’s sure the new adventures that Camp has in store for him will be just as exciting.

Powers of a Child of Dionysus: 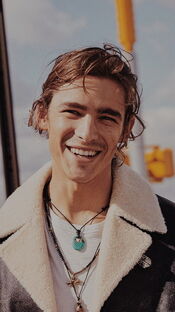 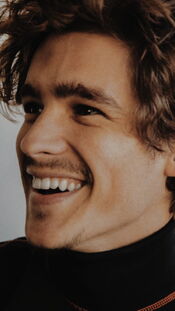 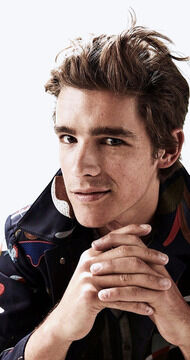