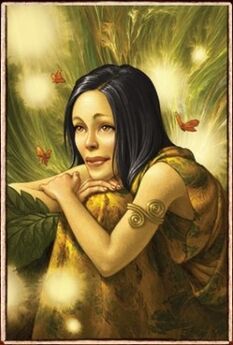 🌸Vital Statistics🌸
🌸Family🌸
🌸Scopes/Patron of🌸
🌸Other🌸

PERSEPHONE was the goddess queen of the underworld, wife of the god Hades. She was also the goddess of spring growth, who was worshipped alongside her mother Demeter in the Eleusinian Mysteries. This agricultural-based cult promised its initiates passage to a blessed afterlife.

In Greek mythology, Persephone is the minor goddess of springtime, flowers and young life. Hecate was born from the love of Zeus and Demeter. Unlike Zeus' other children, Persephone has no stable position at Olympus. Persephone used to live far away from the other deities, a goddess within Nature herself before the days of planting seeds and nurturing plants. When Persephone reached marriageable age, the gods Hermes, Ares, Apollo, and Hephaestus had all wooed her, but Demeter rejected all their gifts and hid her daughter away from the company of the Olympian deities. Thus, Persephone lived a peaceful life before she became the goddess of the Underworld, which did not occur until Hades abducted her and brought her to the Underworld by his infamous kidnapping of her.

Persephone's uncle, Hades, was lonely, and wanted a wife. He spied Persephone in the fields one day, and, entranced by her purity and beauty, fell in love with her at first sight.

Persephone was innocently picking flowers with some nymphs in a field in Enna when Hades came to abduct her, bursting through a cleft in the earth. Later, the nymphs were changed by Demeter into the Sirens for not having interfered. Life came to a standstill as the devastated Demeter, goddess of harvest, searched everywhere for her lost daughter. Hecate, minor goddess of magic, then told Demeter she had heard Persephone scream that she was being kidnapped. Demeter then stopped caring for the Earth, and the land didn't flourish and people began to starve and die.

Hades was determined to make Persephone love him, and tried in many ways. She hated him at first for snatching her away from her mother, but soon she came to revel in Demeter's absence as she had never been allowed away from her mother before. Hades very much wanted Persephone's love and, at first, tried to buy it with many gifts. But then he took to spending all of his day with his new wife, working to make her happy. Hecate, the Goddess of Magic, came down to the Underworld and befriended Persephone, and Hades was pleased, because Persephone was not depressed or unhappy when her friend was around.

When Demeter and her daughter were united, the Earth flourished with vegetation and colour, but for six months each year, when Persephone returned to the Underworld, the earth once again became a barren realm: and that is how the seasons came from. In Spring and Summer, Persephone and her mother are together. In Fall and Winter, Persephone goes back with Hades. This is the myth to explain the weather changes in Fall and Winter compared with Spring and Summer.

Persephone in Greek means 'Destroyer of Light'. Because of her power, she had many worshippers and cults around Ancient Greece and Rome. She had many priests who worshiped in her name, all her followers worshiped holding flowers and pomegranates to tribute her and wore keys around their necks. People would sacrifice animals in her name at the start of Spring to ask for good crops and the first fruits of the seasons were offered to her, Athena and Dionysos. Sneezing was also an omen from Persephone or her mother (Demeter) as sneezing is linked with crops and harvest.

In Roman mythology Proserpina is the goddess of grain, the Underworld and youths. 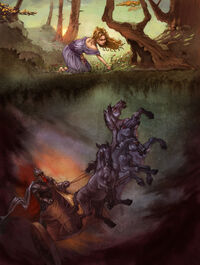 Persephone did not love Hades and to punish him, she decided she would not eat or drink. Hades, who was God of the Underworld, fell in love with Persephone and wanted to marry her, but Demeter refused to allow it. Zeus saw how unhappy this made Demeter and Persephone, so he ruled that Persephone should live with Hades in the dark Underworld for three months of the year and nine months above in the sunlight. Demeter was overjoyed to have Persephone back, but her happiness did not last. Zeus found out that Persephone has sucked on some pomegranate seeds while down in the Underworld.

This meant that Persephone had to go back. Because the plants had all died, people did not have enough food. Therefore Zeus decided that Persephone should come home. There was one condition- she could not have had anything to eat or drink while she was in the Underworld.

In one obscure myth Persephone was accredited with creation of mankind from clay (in place of the usual Prometheus). A divine dispute ensued over which god should possess him, with the result that he was awarded to Zeus and Gaia in life, and to Persephone in death.

Much like the seasons Persephone's personality also seems to change. In Summer, this goddess is warm, loving and caring yet in Winter she is opposite; hard, cold and angry. In the Autumn Persephone is weak as all the plants are dying. This is also because this is the start of her time with her much loved husband Hades. In Spring she is a new person, she's fresher and happier than she is in Autumn and Winter. She has shown much kindness to demigods over times but can occasionally play them for fools.

She was described as a tall, beautiful, young woman with pale skin, flowing, and curled black hair, and wearing a white dress, which, in fact, was actually a colorful dress, though the colors have been washed out. Although she was beautiful during the winter, it seemed like she would be more so during Spring. Her eyes were said to be multicolored, but also appeared washed out, as if the Underworld had sapped her life force. However Persephone's eyes were warm chocolate brown, and thought to be more "welcoming" than they were in The Sword of Hades. She was also said to have more lustrous, black hair.

Add a photo to this gallery
🌷Abilities🌷

As the daughter of Zeus and Demeter and the Queen of the Underworld, Persephone is a very powerful goddess.

Retrieved from "https://camphalfbloodroleplay.fandom.com/wiki/Persephone?oldid=1570280"
Community content is available under CC-BY-SA unless otherwise noted.