Start a Wiki
Πυριφλεγης
Phlegethon won the God/Goddess of the Month Poll competition for November 2013.
This page is only informational and is to be treated as such. Please do not make any roleplays on this page. 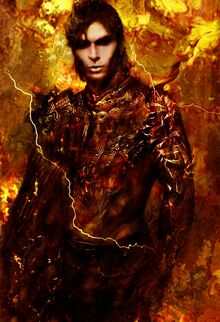 Phlegethon (most commonly known as Pyriphlegethon meaning 'fiery') was the Underworld potamoi or river god of fire, probable sons of Oceanus (Titan of water), and one of the infernal rivers of the realm of Hades, along with his probable siblings: Styx (Hatred), Cocytus (Lamentation), Lethe (Oblivion/Forgetfulness) and Acheron (Pain). Phlegethon punished the souls of the wicked with his fire, so that they can endure the torments of the Fields of Punishment. In some legends, the River Phlegethon is the "River of Healing".

The Phlegethon falls into a vast region burning with a great fire and makes a lake larger than the Mediterranean sea, boiling with water and mud. Thence it flows in a circle, turbid and muddy, and comes in its winding course, among other places, to the edge of the Acheronian Lake, but does not mingle with its water. Then, after winding about many times underground, it flows into Tartarus at a lower level. This is the river which is called Pyriphlegethon, and the streams of lava which spout up at various places on earth are offshoots from it.

Powers
As Phlegethon was also a god, he presumably has the following powers:

Retrieved from "https://camphalfbloodroleplay.fandom.com/wiki/Phlegethon?oldid=1442392"
Community content is available under CC-BY-SA unless otherwise noted.