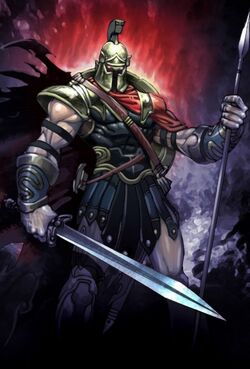 Phobos (Φόβος, literally meaning "fear" in ancient Greek) is the god of fear and the son of Ares and Aphrodite. The suffix "-Phobia" comes from his name.

Deimos was the god (daemon) of terror and panic, and his twin-brother Phobos (Phobus) of fear, flight and battlefield rout. They were sons of the god Ares, who accompanied their father into battle, driving his chariot and spreading fear in their wake. As sons of Aphrodite, goddess of love, the twins represented fear of loss.

In classical art the two were usually represented as youths. Phobos was sometimes depicted with a lion or lion-like head, as in the image right.

Retrieved from "https://camphalfbloodroleplay.fandom.com/wiki/Phobos?oldid=1335902"
Community content is available under CC-BY-SA unless otherwise noted.