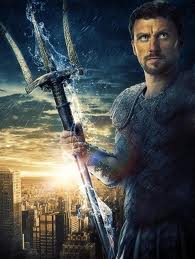 Poseidon (Ποσειδῶν in Ancient Greek) is also known as The Earthshaker and The Father of Horses is the Greek god of seas, earthquakes and oceans. He is one of the many children of the Titan Kronos and Titaness Rhea. His Roman counterpart is Neptune. He is one of The Big Three major Olympian Gods.

Poseidon spent his childhood in his father's stomach along with the rest of his brothers and sisters except Zeus. When Metis and Zeus made Kronos regurgitate his brothers and sisters with a mixture of mustard and wine, Poseidon joined their cause and battle against the Titans, along with his siblings Hades, Demeter, Hestia, and Hera, beginning the Titanomachy or the First Olympian War (actually the First Titan War). They all destroyed Kronos in the First Titan War with Zeus killing his father with Kronos' own scythe. After they won the war against the Titans, the three brothers; Zeus, Poseidon, and Hades drew lots. Zeus drew the sky, and Poseidon the sea. Hades got the Underworld as this was the only realm left after his brothers. Because of this, Hades despised his brothers, and this would cause him to become a slow raging god.

Poseidon built a palace in the sea, replacing Oceanus the old sea Titan, and married one of his daughters, Amphitrite. She became Queen of the sea, and they ruled together. They had a son Triton, whom is his heir to his throne.

Poseidon and Athena both competed to be the patron god of Athens. Poseidon's gift was a salt-water spring (sometimes the horse) while Athena's was the olive tree. The people of Athens chose Athena over Poseidon, because they saw that her gift was better than Poseidon's. This most likely angered Poseidon, because he was one of the 'Big Three' gods (Zeus, Poseidon and Hades), and Athena was a less important goddess.

Poseidon had a relationship with Medusa who was originally a virgin maiden and priestess of Athena. Athena once caught Poseidon with his girlfriend Medusa (who was once a pretty maiden) together in her temple engaging in disgusting acts in her virgin temple (as Athena is a virgin goddess). Furious at Poseidon and Medusa for doing such disgusting acts in her temple, she turned Medusa into a women with snakes hair and eyes can turn people become stones (according to Greece Myth the Book, the "Gorgons Sisters", Medusa is the only person who had the face and beauty of human, while the other sisters doesn't have.). This is also possibly a main cause for Athena's rivalry with Poseidon. 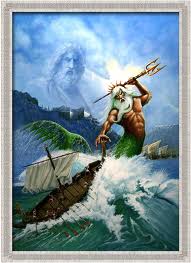 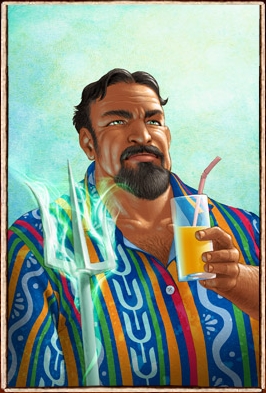 Poseidon is an extremely powerful god rivalled only by his brothers Zeus and Hades, and surpassed only by Typhon. As the personification of the sea, he has omnipotent control over the ocean. He is capable of summoning and controlling fierce storms over the water, though it is unknown to what extent he can summon storms over land or how his weather powers compare to Zeus. Poseidon also has overall powers on the ground. With his trident, he can create massive earthquakes, hence of one of his names: The Earthshaker. Like all gods, his sphere is one with his emotions- when he is angry, he inadvertently summons hurricanes, when at peace, the sea is calm. He possesses the natural abilities of a god. It is assumed that he could transform a person into plankton or kelp.

His power compared to Zeus is a subject of much debate. It is generally agreed that Zeus is stronger, with Poseidon being a close second, however this is only because of the domain that they rule over. While Zeus controls the massive skies and the heavens above, there aren't as many creatures that inhabit it as Poseidon's realm of the ocean. It could also be argued that the spheres they control, with Zeus (sky) being the highest and Poseidon (ocean) in the middle. During the second Titanmoachy he was the only god to seriously wound Typhon, but there were extenuating circumstances on both sides that make the true status in doubt.

Retrieved from "https://camphalfbloodroleplay.fandom.com/wiki/Poseidon?oldid=1638607"
Community content is available under CC-BY-SA unless otherwise noted.