Start a Wiki
Ῥέα
This page is only informational and is to be treated as such. Please do not make any roleplays on this page. 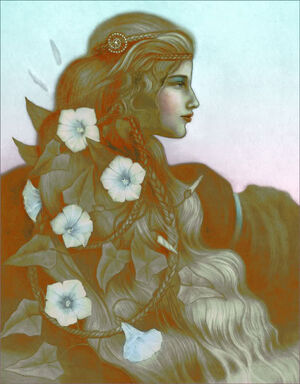 Rhea was a Titaness born to Gaea and Ouranos. Kronos, Rhea's Titan brother and husband, castrated their father, Ouranos. After this, Kronos re-imprisoned the Hekatonkheires, the Gigantes and the Cyclopes, and sent the monster Kampê to guard them. He and Rhea took the throne as King and Queen of the Titans. This time was called the Golden Age.

Kronos sired six children by Rhea in the exact order: Hades, Hestia, Demeter, Poseidon, Zeus, and Hera, but swallowed most of them as soon as they were born, since he had learned from Gaea that he was destined to be overcome by one of his own children as he had overthrown his own father.

When Zeus was about to be born, however, Rhea sought out Gaea to devise a plan to save him, so that Kronos would get his retribution for his acts against Ouranos and his own children. Rhea gave birth to Zeus in Crete, handing Kronos a stone wrapped in swaddling clothes, which he promptly swallowed.

Then she hid Zeus in a cave on Mount Ida in Crete. He was brought there by his grandmother Gaea, and was raised by some nymphs there until he was old enough to take on his father.

After the First Titan War, it's commonly said that Rhea made some demands to be kept as queen of gods and to have a throne in Mount Olympus. Zeus promptly refused all of them and outraged she ran, with her hounds, to the woods, close to Mt. Othrys. Beyond that, nothing is known. Most often Rhea's symbol is a pair of lions, the ones that pulled her celestial chariot, and were seen often, rampant, one on either side of the gateways through the walls to many cities in the ancient world. The one at Mycenae is most characteristic, with the lions placed on either side of a pillar that symbolizes the Titaness.

The principal seat of her worship, which was always of a very riotous character, was at Crete. At her festivals, which took place at night, the wildest music of flutes, cymbals, and drums resounded, whilst joyful shouts and cries, accompanied by dancing and loud stamping of feet, filled the air.

Retrieved from "https://camphalfbloodroleplay.fandom.com/wiki/Rhea?oldid=1335915"
Community content is available under CC-BY-SA unless otherwise noted.