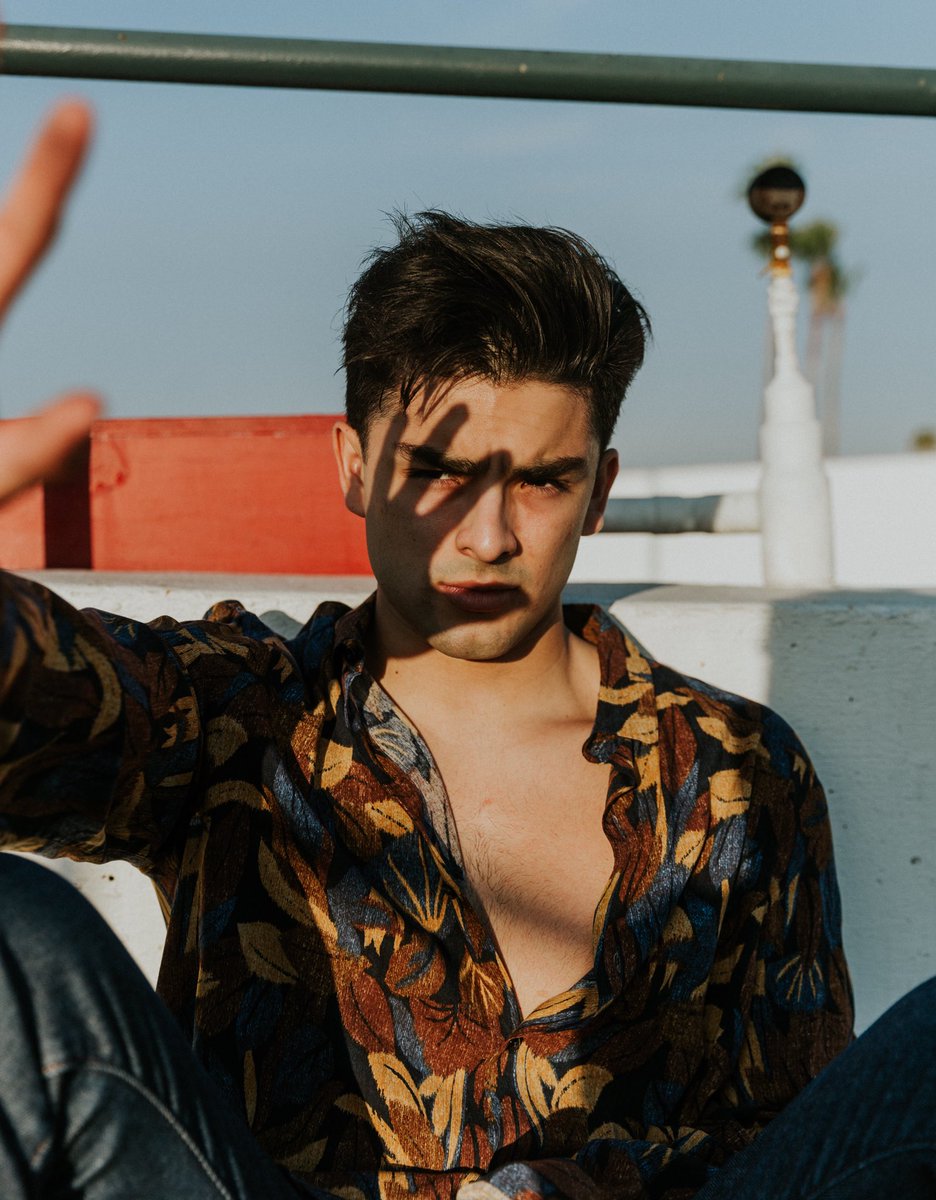 Kara: Kara was dressing Nata in an adorable outfit when she glanced up at the clock. "Ok, almost 10... He should be here any minute," She mumbled to herself. For the first time, she'd decided to go into the city - alone. She was slightly nervous looking for a babysitter to take care of Nata, but in the end she'd met a boy willing to. He seemed nice and trustworthy, and would hopefully take good care of her little bundle of joy.

She looked down at Nata, who was now dressed up in a tiny light pink sleeper and bright rainbow socks. "Now don't you worry once that nice guy comes here to take care of you, ok? He's just watching you for a while until Mama comes back from the city." Leaning forward, Kara planted a kiss on the wiggling infant's head.

Devon: "What are you waiting for?! Kill me! F*cking kill me already!" A cry echoed through the dimly lit room. A young man in a satin-lapeled tuxedo stands at the other end of the room smoking a cigarette, "You're smart," Devon scoffs, "I don't know what you're expecting." He walks over to the man, looking down towards him with a cold gaze; the man thrashes his arm and body against the straps. "You're going to have to do better than that," Devon snickers, grabbing onto the man's bloodied face, "You see, I would if I could, but I'm afraid we're not done with you just yet. Whether or not you die," He glances down at his watch, "That's not up to me." Devon draws the sedative out of the vial and injects the syringe into the man's neck and then gags his mouth. "Rest up, will you? We'll be very busy once I'm back."

Devon's trip back to camp was a rather long and uneventful one, taking a little less than three hours through the means of private jet and car in order to arrive at Montauk. He returns to his room to change into some more unassuming attire—a simple grey hoodie, a red bomber jacket, and a pair of black ripped jeans. He sits on his bed, tilting his head back as a smirk formed on the tip of his mouth. He double taps his phone and glances at the time. 10:00 AM. He leaves his cabin, locking his bedroom door behind him. He easily finds Kara—he could spot her little girl from a mile away with the pink sleeper and all. "Sorry I'm late," he says leaning against a nearby tree with his arms crossed and a smile plastered across his face.

Kara: Hearing Devon's voice, Kara looked out of the open window of her cabin and saw him standing nearby. "Oh, sorry! Come on in!" Picking up Nata, she hurried and opened the door. "Thank you so so much again for agreeing to look after her. It's her first time with a sitter, but she's actually really good with strangers usually, so she shouldn't be too antsy."

Nata looked up at Devon with a quizzical expression on her little face.

Kara noticed a spot on Devon's left hand. "Oh, you've got a little dirt. Here, let me get it." She grabbed a cloth off the counter. (Devon, unknowingly, had a few dried drops of blood still on his hand from earlier.)

Devon: "Guess it's my lucky day then," Devon grins as he glances at down at his Cosmograph Daytona watch. As Kara goes to grab the cloth, he slips the black tungsten carbide-carbon fibre ring off his ring finger as it morphs into a dagger effortlessly and a small cut was left on his hand in the wake of the dagger. By the time Kara turns back to him with the cloth, Devon is seen readjusting the ring (which is back) on his ring finger. He chuckles at Kara's gesture, "Just a small cut, I'll be alright—" He is cut off by the vibration of his phone. "Excuse me," he nods at Kara, before answering it. "Addario." After a brief pause, he turns on the nearby television and changes the channel to Fox 5 News. "I'm all eyes." On the screen was a brown-haired newscaster. "... and the manhunt continues for twenty-four-year-old Adrian Rodríguez who has been missing from Clinton Correctional Facility as of last month. He is described as being six foot two inches, weighing a hundred and forty pounds, with dark blonde hair and blue eyes. The police have responded to a number of reported sightings, but they continue to warn the public that he is a highly dangerous individual and that he should not be approached him if located. Anyone with a tip is asked to contact the New York City Police Department at 1-800-577-8477. In other news, Addario Enterprise has just announced their $49 billion dollar acquisition of Aeos Technology and its subsidiary Synesis Labs. Addario Enterprise CEO Devon Addario made a statement earlier that..." Devon turns the television off mid-sentence. "Will I be seeing you at CORE: Club tonight? ... I'll see you this evening then. ... Of course. ... Pick me up at four. ... Thanks, Jaxon."

Kara: Kara fumbled in her purse for a band-aid, and put it on the counter. "Everything ok there? You seem a little nervous." Nata giggled and smiled at Devon. Kara hoisted her purse. "I've got to get going, I guess. Iris-message if anything happens, alright? I think I've got the hang of earth-traveling with stuff now, and not just me, so I can be back fast if it's an emergency."

Devon: Devon snickers, "When you run a multibillion-dollar business and have a forty billion dollar deal on the line, I think you're allowed to be nervous." He winks at Kara with a smirk as he twirls a gold-adorned black business card in his hand like a playing card. "Give me a call if you need anything," He pulls out a black pen, writing down his personal phone number on the back of the business card before handing it to her. "If not, let my assistant know and she can get a hold of me." He crouches down in front of Nata with a warm smile plastered on his face, tossing his car key fob up and down in one hand and rustling her hair with the other, "You ready to go on a little trip?" He turns his attention towards Kara, "Need a ride? I'm heading out to the city."

Kara: Nata squealed happily. Kara blinked. "Oh, um, sure! And yeah, it's ok to take Nata out places. Just be back at 11 when I said I'd be back? Oh, and she tends to fall asleep pretty easy once she's tired, so I don't think you have to worry about that too much." She paused and smiled. "Thank you so so much for all of this. You're actually the first person I've ever gotten to babysit for me outside of emergencies."

Devon: "Life's all about chances." Devon gave Nata a pat on the shoulder before whispering to her, "Don't miss me too much, alright?"' He makes his way to the cabin door, stopping to turn his head back, "I promise I'd help and I will. Meet me by the road in fifteen?" He gives yet another one of his ever so charming smirks. "Look for the Mercedes, you can't miss it." He does a two-fingered salute before leaping off into the distance.

Kara: "Okay!" Kara made her way to the door after him, only to blink as she realized he was already gone. Wow, he can move fast. She quickly tucked Nata into her carrier with a couple of toys, her diaper bag, and a bottle. "Now, you be nice for Devon ok cutie?"

Nata: Nata kicked her tiny feet and grinned up at her mother. She liked the new man so far.

Kara: Kara smiled back. "Oh, gods, I love those little Rainbow socks. Ok, off we go!" She hoisted the carrier and her purse, and began to walk towards the road.

As she walked, she began to worry, but tried her best to shove her doubts out of her mind. Devon seemed perfectly trustworthy, and Nata already liked him. Everything would be just fine.

Devon: Devon's matte white Mercedes-AMG S 65 Coupe was parked right where the dirt path met the road. Sat atop of the hood, he pulls out a pack of Marlboro cigarettes and a lighter from his pocket, placing a cigarette between his lips to light it. Tilting his head back, he exhales the smoke. He pulls out his burner flip phone, dialing a number and leaving a message. "Interstate 495. One hour."

Kara: Kara walked up, carefully covering Nata's mouth and nose with a light blue handkerchief. "Hey, I'm really sorry to be a bother... Um, could you put the cigarette out? I don't want Nata to get secondhand smoke, and I have really bad lungs."

Flopfish3: Page is up! Thanks so so much for RPing with me! (I'm so excited, this will be fun)

Flopfish3: Lol, no kidding. You went all out! Luckily, Nata has a tendency to see the good in people and trust them. Who knows, maybe she'll remind Devon of some of the good in himself. :)

Retrieved from "https://camphalfbloodroleplay.fandom.com/wiki/Roleplay:Main_Forum/General/Taking_Care_of_a_Child_and_Oneself?oldid=1786972"
Community content is available under CC-BY-SA unless otherwise noted.