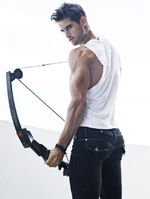 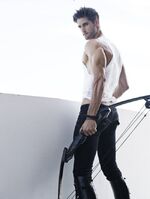 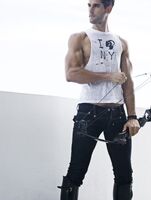 Sapphire: Sapphire, the newly claimed Daughter of Apollo, walked into the Apollo Cabin casually, and looking for a nearby Apollo Child that could hopefully help her get settled in. Her eyes fell on a boy nearby her, and she walked up to him. "Hiya! I'm Sapphire Calder, Newly Claimed Daughter of Apollo. I'm a bit lost, so... Could you help me?" I smiled my dimpled smile.

Bryson: Bryson wears a simple white muscle shirt (Saying: "I ❤ NY") and shorts. In one of his hands, he holds an empty can of Budweiser beer as he lies on his bed in his bedroom. His Fender electric guitar is placed on the guitar stand beside his bed, and amplifier at the end of his bed. In the garbage can is another can of beer, and lying on the ground near it is a crunched up can. With his face still minorly red from the alcohol, upon hearing Sapphire's voice coming from outside his room, he squints his eyes and gets off his bed and onto his feet. Still a little drunk, he only heard something along the lines of "Hiya!" and "daughter of Apollo". He walks to the mirror and fixes fixes his hair quickly before walking over to Sapphire, "The name's Bryson," he winks at Sapphire, "What brings you to your half-bro's room?" He says, grabbing a hold of his electric guitar and amplifier as it transform back into it's compact form of two guitar picks, placing them in his pocket.

Sappire: Sapphire smirked at him, immediately taking a liking towards her new half-brother. "Well, brother, considering you're a bit tipsy, you may not be my best choice, but I have just taken a certain liking to you. I just need to figure them out. Anyways, I'm new and need someone worth my trust, you, to show me around Camp." She smirked and winked back at him.

Bryson: "I know I can be irresistible," he jokes, flexing his muscles in front of Sapphire. "But I haven't seen a girl fall for my charm "this" quick," he says with a grin. "And I'm not "that" drunk. This," he says pointing at his slightly red face, "Is nothing." He chuckles, "I'm much of a tour guide, but I can bring you to a place that's going to get your adrenaline pumping. You up for it?" He smirks.

Sapphire: Sapphire let out a small laugh. "I'm not a normal girl, darling." She smirked back at him. "As for the other thing, sure. I have nothing more to do."

Bryson: "Well meet me at the camp entrance when you're ready! You're seriously gonna love that place," he says as he goes back to his room to grab his phone before walking out of the cabin and towards the direction of the camp entrance. Upon exiting camp, he leans against a tree outside of the camp entrance nearby the road to camp. He is currently using his phone as he waits for Sapphire. Looking up from his phone, he chuckles as mumbles to himself, "Girls sure take forever."

Sapphire: Sapphire shook her head and let out a small laugh. She walked to an empty bunk and put her two duffle bags and backpack there. She grabbed her black leather jacket, and put it on. She grabbed her Iphone and walked out the Cabin. Sapp was wearing her black leather jacket, long black skinny jeans, white boots, a obey snapback, and a white shirt. She walked up to the Camp Entrance, where she jumped on his back. "Hey Big Bro." She greeted cheerfully.

Bryson: He puts his phone in his pocket and turns to Sapphire, "Oh you're here! Here," he says smiling, taking out two fake I.D cards from his pocket that he had gotten for both of them for the rave. "You'll need it if you wanna drink," he winks at Sapphire. "Okay, follow me," he walking ahead towards the outskirt of the nearby town. He then turns back, "What are you waiting for?" He walks behind Sapphire and tries to push and nudges her forward.

Sapphire: Sapphire stares at him, before smiling and shaking her head. She begins walking once again with her brother. "So, are you the only Apollo Child who actually shares the same definition of fun as I?" Sapphire questions.

Bryson: "Yeah! But we do have the same dad." As Bryson has taken the quickest route to the abandon buildings and warehouses where the rave takes place in, after the short conversation they would now have sight on the guards that stand at the entrance. "Well we're here, the rave! This is the party everyone has been talking about. Trust me, it's much cooler on the inside," He takes out and waves a fake I.D. card and motions for Sapphire to take it. "You sure you don't want it? I hear they've got nice drinks in there," He smirks as he walks up to the guards showing his own fake I.D. card, in return he receives the glow bracelet, which he wears on his wrist immediately, that allows him to drink here. Loud music can already be heard blasting in the interior of the building.

Sapphire: After making the split decision of using the I.D. and being given the bracelet, Sapphire walked after her brother. Yes, he may be only her half-brother, but she considered him her full-blooded brother. "Well dayum." She murmured, "Hope my ears don't disintegrate." She mumbled.

Bryson: "Well you should get used to it, we are Apollo kids. And come," Bryson says, smiling, before taking Sapphire's hand and tries to pull her towards the paint station nearby. Upon him (or Sapphire as well, unless she refused to be dragged) arrive, Bryson takes off his shirt and the painters use neon paint to draw a design very similar to this, but with neon red and a neon light blue outline across his chest and right arm. The painter then proceed to paint a lightning bolt with neon yellow paint over the right side of his face. After they finished, he stands up and turns to Sapphire, "So, how does it look?"

Sapphire: Sapphire's eyes widened a bit. "Looks amazing." She admitted. "Well, looks like I'm getting painted as well." She murmured, and waited for her turn to come.

Bryson: Bryson takes his phone and takes a selfie of himself of his new look. "Be right back, gonna get a beer, want one?" he asks Sapphire as he begins walking through crowds of people over to the bar. Seeing that he's at the bar, he might as well get a glass of whiskey as well. He takes the glass of whiskey, drinking it all and leaving the glass, before heading back to the painting station. In his hands are two cans of beer, both for himself or one of them for Sapphire if she wants one. He decides that seeing he's at a rave, might as well get drunk and have some fun.

Sapphire: Sapphire sighed as he brother left her with the painters. While Bryson was gone, they painted a neon green eye with neon red flames inside it on her right cheek. They also painted on her left side of her face, something like this: http://becuo.com/tiger-eye-face-paint (the first one on the top corner) on her left eye with different neon colors. When Sapphire saw Bryson come back with two beers, she grinned, "About dam time."

Bryson: "Yo, catch!" Bryson says, tossing one of the can of beer to Sapphire. He leans against the wall and pops open the can of beer, drinking from it. "Hey, I met a few girls on the way. They kept me 'occupied'," he jokes as he looks at Sapphire's new look, "Ooh, looking cute!"

Sapphire: I caught the can and opened it. "Well, seems like you had fun with them." Sapphire smirked, "After all, not all of them get to be in the hands of Apollo Children." She said and drank from the can.

Bryson: Bryson crunches the empty can and tosses it at the nearby garbage can, "Well, what are we waiting for? Let's go and have some fun," he grabs onto Sapphire's hand, hoping to take her onto the dancing area which is the main hype of the rave.

Sapphire: Sapphire rolled her eyes and threw the empty can to the garbage can. She then followed her half-twinzie to the Dancing Floor. "Looks like it's time to have fun." She mused to herself, ready for a night full of alcohol and dancing.

Bryson: "Close you eyes for a sec," Bryson says at the center of the dance floor. Not checking if Sapphire took his "advice" he creates a burst of light causing those around to move back from the sudden burst of light. Now with space, he drops down to the floor and breakdances (with a combination of windmills, flares, and etc.). He then does a backflip back on his feet, "Did I mention that I breakdance?" He says chuckling. Having just regained his balance from the backflip, a demigod bumps into Bryson causing him to tumble forward towards Sapphire.

Sapphire: Sapphire closed her eyes just in time, and opened them as Bryson was breakdancing. "Well Damn." She laughed, staring at him go. "I think I just found out." She smirked, and when Bryson tumbled back, she tried grabbing and balancing him. "You okay?" She snickered.

Retrieved from "https://camphalfbloodroleplay.fandom.com/wiki/Roleplay:Main_Forum/Town_Locations/Rave_2014/Kevin_and_Malik?oldid=1439860"
Community content is available under CC-BY-SA unless otherwise noted.