Seamus is quiet, yet kind and friendly. He seems as a loner to most people, but he's really fun and flirty. When he's in the mood, he can be pranky - like he used to be- and hyper. Upon leaving his brother, he became more and more quiet, and not wanting to speak to anyone else.

Katherine Harfield was the daughter of a two Irish doctors. Being the youngest of 5 kids, she was hardly ever noticed, the only attention she got was from her friends. Despite this, Katherine grew up to be the smartest of the Harfield Children, her two sisters becoming house wives at the ages of 20 and 22, and her brothers moving abroad as soldiers, one to Russia and one to Australia. At the age of 24, Katherine was already a graduate from Oxford University and was returning to Belfast to become a nurse.

One bright summers day, in the hospital that she was working in, Hermes approached her, with a warm, welcoming smile, in which Katherine was attracted immediately. She and the God started to date, and three months later, the two had sex and the god left soon after, but he told Katherine who he was, and said he'd give her any support from wherever he was, when she wanted it. Nine months, on the 5th August 1994, Seamus and Danny were born.

Seamus and Danny grew up well with each other; rarely being seen alone. They were always commonly known as 'Seamus and Danny; the trouble makers of Belfast', since they were forever playing pranks on people, and were often compared to Fred and George from the Harry Potter Series, Seamus being 'Fred' and Danny being 'George'. Seamus would always call Danny 'Georgie' as Fred did, and Danny would call Seamus 'Freddie'. When they were 11, their Mum got married to John Petite, Seamus and Katherine took up the last name 'Petite' and Danny kept Harfield. When they got older, Seamus became more quiet and funny, whereas Danny became more rebellious and louder. When they were 13 and walking down an alley way to get back home, they were attacked by a hellhound. In an almost natural instinct, they both grabbed the nearest weapon, which was two iron poles, since it was the famous alley where people dumped their rubbish and unwanted items, and began to defend themselves.

Eventually, the hellhound went away, and then twins were left alone once more in the alley way.

When they were 16, their school had a trip to New York for photography. Seamus, who was deeply interested went on the trip, and Danny stayed back in Ireland awaiting his brother's return. About one day before the end of the trip, a letter appeared to the Petite-Harfield's door, saying that Seamus had left the trip, but was in safe hands. Katherine knew that he was now at the Camp that Hermes had once talked about. Danny, now depressed, became closed up.

Two years on, Katherine who got letters from Seamus all of the time, hated seeing Danny depressed, so on his 18th birthday, took him to Camp where the twins were reunited.

Upon arriving in America for the photography trip, Seamus was happy to be away from Ireland; the change had grown on him, and at the end of the trip, he was resentful to leave, so he asked the organiser of the trip if he could go and live in America. Of course, the trip leader refused, saying that he had to go back to Ireland. As if on cue, a satyr came and walked up to the organiser, and claimed that he was Seamus' Dad and that his mother had allowed him to take Seamus with him to LA. The Satyr had a forged letter agreeing to this, and so, Seamus was now free in America. 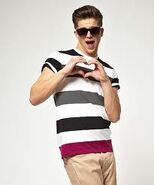 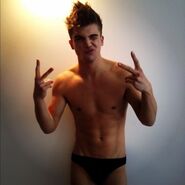 Add a photo to this gallery
Retrieved from "https://camphalfbloodroleplay.fandom.com/wiki/Seamus_Harfield?oldid=1549069"
Community content is available under CC-BY-SA unless otherwise noted.