Smokewraith, or as he answers to, Rai, was born to two centaurs, Ereth and Delilah years ago. Though not long after he was born, their village was attacked and pillaged by empousa. Fearful for Rai's life, Ereth and Delilah sent him off with a younger centaur, who took him to a Native American reservation. The natives, fearful of the man-beast, shot him dead and took in the crying child.

One of the elder men, Malachi, in the reservation took the baby in and saw him as a gift from the gods, naming him Smokewraith, as he claims the child appeared to him in a dream in a cloud of smoke.

Living in the Apache reservation, Rai soon learned all of their ways, which, incidentally, coincide with the ways of the centaur, so it mostly came naturally to him. He enjoyed life on the reservation for the most part, though he hated having to hide when others would visit the reservation, and the stares the younger children would give him when they would see him. The look of fear and disdain.

One day while a girl was visiting the reservation, she was attacked by a group of harpies. While going to help her, a guy with goat legs came barreling into one of the harpies, but was slashed by her talons. When Rai approached, the satyr turned to him and gave him directions, telling him to take the girl to New York, and make sure she made it to camp safely.

Seeing more harpies approach, he threw the girl onto his back and ran as fas as he could towards New York, arriving in minutes. He saw a forest near Long Island and decided to enter for shelter. Unbeknownst to him, this was the forest near camp and was shot by a few Apollo campers. When they ran in, they saw the girl and she was claimed there as a daughter of Tyche. They took her into camp and healed Rai the best they could in the forest, eventually taking him into the infirmary. He woke up in the infirmary, and decided to stay at camp, looking over the girl, and feeling more at home at camp than he ever did at the reservation. He now resides in the forests.

Rai is bold, occasionally impulsive, and valiant. He has a strong sense of justice and is a strong believer in karma. He is an honest and caring person, a classic romantic, and is occasionally a flirt. He’s quick to take control of a situation, and usually slow to take offense. 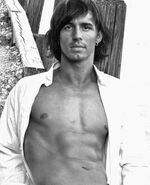 Rai's upper half is a Caucasian male. He is 8’4, 325 lbs. He has brown hair and blue eyes. He is highly muscular with an athletic build, and the horse hindquarters of a brown stallion.

Retrieved from "https://camphalfbloodroleplay.fandom.com/wiki/Smokewraith?oldid=1335946"
Community content is available under CC-BY-SA unless otherwise noted.