Stephen is usually quite introverted, preferring to be alone than be surrounded by people and adores solitude. He loves the sea, swimming, boats, sea life and when his was a young boy at the farm he always believed there were mermaids at the bottom of the pond outside the house, they were water nymphs.

He tends to ignore people a lot and stare into space. He dislikes tidying up, preferring to live in his own mess and loves cooking, but of course doesn't clean up after himself. He loves exploring and taking risks no matter what the cost and thinks any dream can be made true all you need is a goal, motivation and a little bit of magic. He has shown to be quite flirtatious when he's around people he finds attractive but wouldn't dare approach them unless they were alone.

Stephen left camp roughly 4/5 years ago after growing bored and wanting to spend time away. He spent time travelling around the U.S in his Yacht, seeing new places and meeting new people. It was during this time that Stephen actually had a "gay awakening" and realised he was bisexual. He has now returned to camp, eager to meet his new siblings at Poseidon's Cabin.

Once upon a time in the small town of Portsmouth, England lived a young woman Penelope Miller, her husband Kurt and daughter Elizabeth. It was during World War 2 when this small family thrived around the south coast of England. Kurt was a general in the army so wasn't around much but one day Penelope got the horrible news that her husband had got killed by a bullet to the skull. Upset by this Penelope ran away to the nearest lake, leaving her 14 year old daughter Elizabeth alone in their small house in town. Upon reaching the lake she saw a young fisherman there, about 28. Wishing to be alone she tried to walk away from him but ended up being intrigued but his looks so sat down beside him before talking to him even though she was still recovering from her husband's death.

After a few hours the man said he'd brought wine, Penelope, dying to drown her sorrows agreed to drinking some of it. Soon they were both drunk and laughing their heads off. The man ended up coming to see Penelope and Elizabeth everyday becoming sort of like a second father/husband to the two women and soon he and Penelope fell in love and decided to have a child. During the birth of their child however Penelope died and the man, who was secretly Poseidon had to leave so after he was able to bring the child home he decided to leave the child off at an orphanage, getting Lethe to erase Elizabeth's memories of him.

When the young boy, who was named Stephen was six he was sent to Australia with several other boys due to the fact the orphanage could no longer care for them, hence splitting up Elizabeth and Stephen, something which the owners of the orphanage didn't what to do but had to for the sake of the establishment.

On the boat ride to Australia Stephen was often bullied for several reasons. 1. his accent, 2. his young age, 3. his sleep talking, he often dreamt of his father who he only saw once as a baby and tried to talk to him. It took about 45 days to get to Australia but as soon as they got there they realized that they'd entered the best place ever, or so they thought.

Soon they were taken in by a sorta old man, he was about 50 years old and his younger wife. They took them to a small farm in the countryside just outside Sydney and made them work there, it was fun at first but soon the work got more tiring, and worst of all the man started abusing the children if they did wrong such as try and run away or didn't turn up for hymns on Sundays. All children were meant to play for an hour every night and every morning, Stephen didn't do this all he did was sit on his knees for the hour pretending to pray to a god he somehow knew didn't exist.

Several years past of undeniable hell for the ten boys still living at the farm, one had died after falling into a slurry pit and the other went missing a few weeks ago after stealing a horse from the shed and fleeing, the horse was found dead but the boy nowhere to be seen. A few weeks before Stephen turned 10 his best friend asked him whether or not he wanted to go on an "adventure". Stephen being oblivious to what his friend was thinking went ahead with this and followed his friend, Albert into the stable before picking out the healthiest looking horse, which was named White Valley for some reason and with this the two boys got on the horse and galloped off into the sunset, thinking they were gonna live happily ever after.

The boys lived for a while on the streets, Albert being considerably older than Stephen so at this stage enabled them to live on the streets for a longer time that if it was just Stephen but soon Albert got the job offer of a lifetime, to be able to build boats, plus it gave him a place to live and it also allowed him to being Stephen, who was basically his brother now, to live on the small boat with him. After they moved into the boat Stephen was faced with his first monster attack, however Albert being a Darkness Spirit who stayed at camp which he was sent to England by Poseidon in order to look after Stephen until he was old enough to go to camp had fighting skills and powers so he managed to kill the monster, who was a harpie, no problem. This was when Albert took Stephen to the side and told him all about his heritage. Stephen didn't start to believe him util a few weeks later when they were faced with their second monster attack. This time it was a hellhound and sadly Albert died due to drowning after being pushed off the deck into the water.

The hellhound began to run after Stephen but one of the workers at the boatyard revealed himself to be another demigod child of Poseidon after killing the hellhound who was only a young one so was easy to take down. He was about twenty-five old enough to have left camp and apparently he'd taken a job in this boatyard in order to feed him wife and son. When Stephen dived in after Albert to try and save him the other worker, who was named Weston, decided to go in after him knowing Stephen was a demigod and had to be saved at all costs. However when he got into the water he realized something wasn't right, he could hear Stephen's thoughts, this led him to believe that Stephen was a demigod child of Poseidon and feeling as though he should help his brother get to the only place to keep him safe he got into one of the boats which was just finished a few moments before the monster attack without giving any warning to the manager of the boatyard and went off sailing to camp.

It was normal days at sea, they had food from the fish, they had water but one night Aigaios was having a pissy fit at Poseidon for stealing his sword and do created a sea storm right outside camp borders, the ship was pulled apart, wrecked. The next morning Stephen and Weston washed up on shore at camp, the boat destroyed and all their personal belongings ruined. The two boys were found by an Eros kid who because of his extreme compassion decided to help the two boys who were washed up on the shore. When staying at the infirmary Weston died of injuries but Stephen survived and while he was happy to be alive he became depressed due to losing Albert and Weston.

When he was at camp around the ages of 13-15 he became quite popular with the ladies and tended to flirt and seduce them a lot much to Dionysus' dismay so much so to get him to stop he cursed him into only being able to drink water for a fortnight, it wore off awhile ago but water is still his favourite drink. About a year later when he was sixteen a girl came to camp named Anabel the two didn't really get on to start with but as soon as the two started talking they became friends and soon the they started to date after Stephen's seventeenth birthday. One night just before Stephen was due to go on a quest to find a special pair of Poseidon's sandal that Aphrodite gave him to impress the ladies the two did thing that are not necessarily considered PG13.

Soon however he had to go off on his quest with two other demigods a child of Cybele and a child of Demeter. During this trip he somehow figured out that Anabel loved him more than he loved her so therefore made things pretty awkward and confusing between them. On the quest they managed to retrieve the sandals, but one night when sailing home from the caribbean islands Stephen had a moment of insanity and accidentally killed the two demigods on the boat with him. After he woke up the next morning he realized that their bodies were so mangled apart from a scarf from the girl's neck, feeling the guilt he put the scarf around his neck as a symbol of his guilt but that didn't stop the two demigod's parents from hating him, oh hell now, they even went as far as cursing him.

The curse meant that as soon as the sun set he began to die, basically during the night, when the sun is down. But when the sun is up he can roam around as much as possible. He doesn't age unless he stays on land too long which then Demeter and Cybele age him a year as a warning/reminder. This has happened to Stephen five times bringing his age from seventeen to twenty two. The first instance happened once when him and Anabel were staying up late on her cabin roof, the sun began to set and Stephen, not really knowing the details of his curse started having what he thought was a panic attack on the roof, it wasn't. Because he was out of water after the sun disappeared in the horizon. He didn't know what to do for five minutes but he quickly ran to the ocean and slept in an air bubble under it until morning where he managed to get a boat from Dionysus in order to live on. He and Anabel tried to make it work but they soon went their separate ways, she joined the hunt, he stayed at camp, living on his boat. They haven't really spoke/seen each other since. 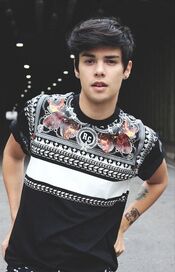 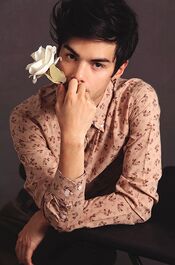 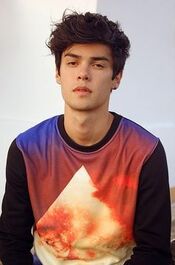 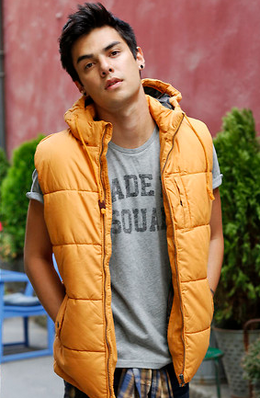 Retrieved from "https://camphalfbloodroleplay.fandom.com/wiki/Stephen_Miller?oldid=1824757"
Community content is available under CC-BY-SA unless otherwise noted.