This character belongs to Kaneity

Symphony has a big passion for music, she likes to help others achieve their musical dreams. She is highly patient but becomes impatient or annoyed if you truly don't understand or you act real dumb, Symphony is also very professional, having polite manners, a serious attitude and grace.Most of the time she is kind, but if you insult her or insult about music she will murder you. Symphony's favorite instrument to play is the violin or viola.

When Mozart was born in 1756, Apollo could see the music potential in him, although his father was a trained musician, Apollo decided he needed more help from someone more knowledgeable about music and created Symphony, a music nymph. The mist disguised her as a lady named Serena Bach in her early 20's who teaches musicians for living, she taught Mozart daily and he practiced all the time. She taught Mozart movements and skills that even Leopold, his father didn't excel at. She also taught Mozart difficult songs which even he had a little difficulty playing but quickly mastered with the help of her. Mozart started composing at the age of 5, which pleased Apollo greatly as Symphony began accompanying Mozart to trips to Europe where he was showcased as a child prodigy and played for royalty. Apollo decided to withdraw Symphony in 1768 when the family was going to Vienna. He felt that it was time for Mozart's career to start and that he didn't need her help anymore.

Her name was erased from history and Leopold was given all the credit for helping Mozart train but Mozart still dearly remembered her and was inspired to write a couple of his famous songs, though Symphony still secretly helps musicians like Beethoven, Louis Armstrong, Adele, Taylor Swift and more thrive in the music world. After years of helping musicians, Apollo decided to send her to Camp Half Blood, where she still continues training campers who want to pursue music, no matter how terrible they play or how squeaky their voice is, she is still determined to turn that person into a star. 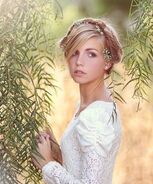 Add a photo to this gallery
Retrieved from "https://camphalfbloodroleplay.fandom.com/wiki/Symphony?oldid=1758307"
Community content is available under CC-BY-SA unless otherwise noted.