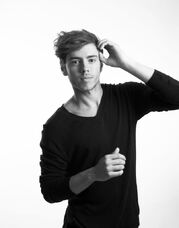 Personality: Benjamin's parentage is for the most part unknown as for the shit that went down during his childhood and as such is very bitter towards whoever his real god parent is despite how obvious it may be to other people. He's stubborn especially when it's something he cares a lot about but is easily confused or knocked off track. He's carefree for the most part despite his problems and the curse that looms over him 24/7. His brain is pretty slow and it takes him a while to work things out especially when it comes to girls and flirting, obviously ruling out Eros. But despite all this Benjamin is quite a carefree guy who doesn't really mind much and can be quite amusing. He's a great blacksmith.

History: In the sanctuary of Hopewell's Landing (see Samira's history for detailed explanation), below all the hierarchy and bullshit there were several families named "Slave Families" which lived near the bottom of the apartment blocks. These families were the people who served. They made food, the got food, they made clothing, bought clothing, made weapons and all the other things which the more powerful demigods and some mortals that could see through the mist couldn't be assed to do. Veronica Locke was a woman in one of these families. The Locke family used to have a lot of demigod blood in them, claiming to have descended from one of Hopewell's female ancestors, one which was a child of Zeus. However many people dismiss this as myth.

The Locke family's demigod blood had all just ran out when it got to Veronica and her brothers. Her brothers couldn't even see through the mist and as so were made leave as soon as they reached adulthood and Veronica could just barely see through it. When Veronica was just turning 19 she met Zeus and well one thing went to another and soon he left her. When she was just turning 20 she met Poseidon, again one thing led to another and then he left her. The kept happening, she'd meet random gods, one month it would be Eros the next Morpheus and soon she was known all around Olympus for being "The Woman who'd open for anyone". However only two gods had yet to have lay with her. Hephaestus and Ares. They didn't explain to anyone what they were doing and instead went secretly, wanting to know what everyone was raving about. In the morning Ares came and greeted her and soon despite the fact they'd only just met, they.................. Read more here 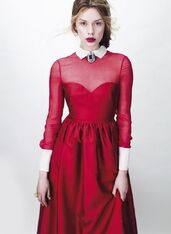 Personality: Samira is a very strong headed individual, fighting for her beliefs anytime someone tries to prove her wrong. She laughs in the face of gender stereotypes, preferring her collection of weapons to kitchen utensils and sewing needles, much unlike her step sister Louise. She is courageous, quite resourceful, and cunning. She's never afraid to get her hands dirty. Ever since finding out about her family's demise, the only thing she longs for is revenge, the anger burning her up and causing violent outbursts from time to time, most of which Ben has to suffer through. When she's not breaking things and punching walls, she broods and spends time alone, polishing her sword, daggers, and throwing knives.

History: Once, in the French Quarter, also known as the Vieux Carré, there was a sanctuary which, much like Camp Half Blood, housed many demigods under one roof. There were many other places like this around the country and in fact around the world, since camp in those days was awfully hard to get to, but — although they were greatly protected — they could never reach the same level of protection as the main Camp itself, as the gods weren’t directly protecting it. The group of demigods which resided in the camp in the French Quarter called their building “Hopewell’s Landing” as a young demigod son of Zeus under the alias of Hopewell founded the sanctuary in 1760, only a few years before the French gave up their territory to Spain. Generations passed and soon it became a tradition to have at least one demigod child in every generation so that child would be the heir to Hopewell’s Landing, which frequently changed as the years flew by, until finally it became a large, yet expensive looking apartment building with the penthouse belonging to the leader and his family. Many years passed and soon the running and ruling of the place was passed down to the last demigod born to the heir of Hopewell, Christopher Summers, a son of Poseidon who’d just entered adulthood. To say Christopher was a player would be an understatement. He managed to father four demigod children, Logan, a son of Lyssa, Louise, a daughter of Aphrodite, Aaron, a son of Asteria and Taylor, a son of Nike. Soon, however he fell in love with someone of his own occult, a daughter of Boreas, and married................... Read more here

Retrieved from "https://camphalfbloodroleplay.fandom.com/wiki/Template:Collab_Contest_Winner?oldid=1457205"
Community content is available under CC-BY-SA unless otherwise noted.