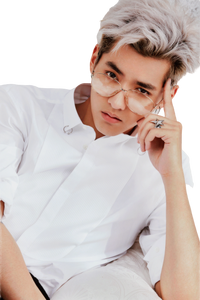 Name: Xavier Yan
User: Broken
Age: Immortal (b. 1824)
Gender: Male
Species: Demigod
Historical Event: Opium Wars
Personality: Xiang is lone, skillful, and poetic. He also lives with a skewed moral compass. In spite of Lin ZeXu's anti-drug teachings, his soft heart cannot tolerate others' emotional suffering. Thus, he helps numb their pain with casinos and drug addiction. Moreover, years of loss leads to depression, anxiety, and intrusive memories. His emotional turmoil causes the son of Akhlys to ingest alcohol and drugs to feel the high moments - like seeing his departed wife and daughter. However, upon hearing about Maria's revival, he finds his purpose in life again. He is often found smoking or writing poetry in the camp cliffs. His moral alignment is chaotic good.

“殺雞儆猴。 Kill a chicken to scare the monkey.”

A thousand years ago, Emperor Taizong of Tang incurred the wrath of Olympus for wiping out the Lui half-blood village. While the clan was favored, the hubris of some members caused Zeus to permit their destruction. However, in honor of the virtuous souls, Zeus, through the sons of Apollo and of Mnemosyne, commissioned the “Tu Bei Tu,” a book of 60 prophecies - a better name for curses. As the introductory poem declared, each page was to be fulfilled by a half-blood until the end of China. Thus, every century, the Fates would select a tribute for the soul of the prophecy carrier.

Page 36: the tree of life is stabbed with a white flag. its leaves are dark, dying.