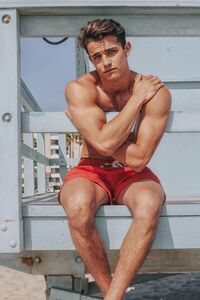 Name: Kellan Bernadotte-Hohenzollern
User: EvilhariboMadness
Age: Immortal
Gender: Male
Species: Demigod
Godparent: Physis
Personality: Kellan is an individual that is best described as an 'eager puppy.' He's incredibly extroverted and loves nothing more than getting ti know as many people as he can. Influenced by the nymphs he grew up with, Kellan enjoys learning as much as he can about anything he can. Although his dyslexia and ADHD do slow him down somewhat, he tries to not let it get in the way and persevere. One thing many would note about him is how warm-hearted he is and, much like nature, how he can adapt to whatever situation he is placed in. An incredibly loyal individual, some have joked in the past, albeit unknowingly, that Kellan resembles vines; once he gets attached to someone, it's very hard for him to let go of them and he'll follow them wherever. Although he does prefer to be kind, Kellan has a wicked sense of sarcasm and often enjoys surprising his friends with how callous he can be. It's all in good fun - as he constantly makes sure those around him know that - but it's even more fun to see their reaction to it. A skilled botanist, Kellan enjoys lazy days and would happily take a day of gardening over doing something physically intense. Sure his time on Olympus has made him a little more likely to do something more adrenaline filled, Kellan can't shake away the love of just pottering around his room and tending to the plants he owns.

One thing that Kellan makes sure not to let on, however, is how worried he is about what's happening to him. He's aware it's some form of a curse but, beyond that, he's completely in the dark. He doesn't know why his skin is a little pinker than most, nor why he reddens faster than everyone else or why his veins are greener rather than blue. Trying to figure out what's happening to him is consuming his life slightly, it being the sole reason he went to New Athens in search of an answer. Not one to burden those he's close to, however, he keeps it silent in favour of suffering alone and making sure that nobody is worried about him. A pretty positive person, much like his fear of his curse, Kellan prefers experiencing his negative feelings alone. Although he can never truly stop people from seeing him sad, scared and angered, the son of Physis tries his best to conceal them. He enjoys his reputation of being the life of the party and the one to bring up the mood that he actively tries to avoid it being tarnished. It's typically only when he's alone in his room that he releases all the pent up emotions of the day. A little destructive in his methods, Kellan can be quite reckless when it comes to self-love when he feels down and low. Like many, he much prefers prioritising the needs of others before himself and, subsequently, he often tricks himself into feeling that very few care about him as they fail to pick up the signs he thinks he's putting down when he isn't.


History: Prince Ludwig Hohenzollern, a minor member of the German Imperial Family, had always been the black sheep of the family. Ever since anyone could remember, he much preferred indulging in pleasures of the common folk rather than enjoying the refined luxuries of royalty. Instead of hunting and attending royal balls, he much preferred getting dirty and playing rough with his siblings. Thus it was of little surprise to anyone that he had a large distaste to the idea of an arranged marriage. For some, the distaste was little more than another refusal to be the royal he was meant to be but, for Ludwig, it was a chance to cling onto his freedom. You see, Ludwig perceived marriage as chains and locks that would bound him to the ground and force him to become more regal in his actions. The man had built himself up on being free and doing whatever he wanted whenever and thus marriage being forced upon him (at the age of twenty, no less) seemed like a nightmare come true.

It was around this time that Ludwig met Physis for the first time as he roamed one of the imperial family's many forested gardens. Posing as a lesser royal of one of the many royal houses in Europe, Physis struck up a conversation with him under the guise that she was there on official royal duty. She had seen from afar his carefree attitude towards life and knew of his battle to uphold it. She saw how he valued his days walking in the vast expanse of forestry in the royal grounds much more than those cooped away in royal meetings and balls. Physis encouraged him to continue fighting for that, promising that they'd meet again. As one would expect, Ludwig began to pine over the royal that Physis presented herself to him; the royal that understood him and wholly got what he meant. It was him who suggested to his parents that her alias - Princess Petra - be considered for his marriage. Met near always with looks of confusion, Ludwig was brushed off most times...................Read More