Thanatos won the God/Goddess of the Month Poll competition for June 2011 and July 2013. 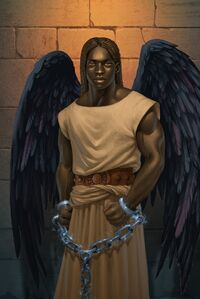 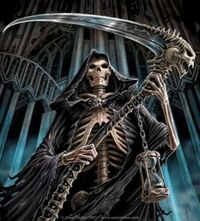 Thanatos is the Greek God of Death, the son of Nyx and Erebus, and the brother of Hypnos, Nemesis, Eris, Keres, Oneiroi, and many others. He is often shown as the Grim Reaper. He is often confused with Charon the ferryman. His Roman form is known as Mors.

Thanatos was once tricked by Sisyphus which was one of the reasons why he (Sisyphus) was punished in the Fields of Punishment. When Thanatos came to take Sisyphus to the Underworld, Sisyphus chained Thanatos to a rock which greatly angered him. Due to this Thanatos could no longer take souls of people. Ares was annoyed because everyone whom he killed would not die so it took the thrill out of kills. He then released Thanatos and death went on.

Thanatos is the harbinger of peaceful death while the others bring the complete opposite of it. He is depicted as a young man with an inverted torch and wreath of butterflies in his hands.

Retrieved from "https://camphalfbloodroleplay.fandom.com/wiki/Thanatos?oldid=1570242"
Community content is available under CC-BY-SA unless otherwise noted.