Start a Wiki
The Recording Studio 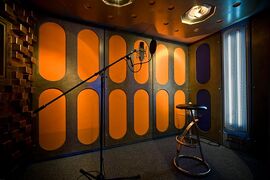 The Recording Studio is located aside the Apollo's Cabin on Camp Half Blood. It was a gift from Apollo to his children. Here the Apollo Cabin and other demigods with permission from the Apollo Cabin can record music and make records. It is a small building with a big sign saying "Apollo Recording Corps". Inside is a sound booth and an editing panel, inside the sound booth is an enchanted cupboard that can pull out any instrument.

This is not only for Apollo kids. If you are interested in playing please get permission from an Apollo kid, enjoy. Also, the studio has a security system to stop vandalism.

If you want to participate, put your name here

The Kings of Kings

If you recorded a CD, put it here.

Panic! (Panic! At the Disco cover) by Logan Weston

The Graveyard by Monster Mayhem

Inside there is a note from Apollo

Retrieved from "https://camphalfbloodroleplay.fandom.com/wiki/The_Recording_Studio?oldid=1791676"
Community content is available under CC-BY-SA unless otherwise noted.