Start a Wiki
Τύχη
Tyche won the God/Goddess of the Month Poll competition for September 2013. 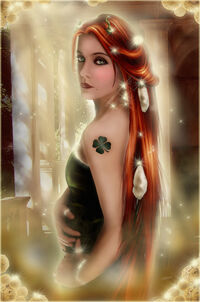 Tyche (Τύχη in Ancient Greek) is the goddess of luck and good fortune. Her antithesis is Nemesis, goddess of balance vengeance. Her Roman counterpart is Fortuna. She was usually honoured in a more favourable light as Eutykhia, goddess of good fortune, luck, success and prosperity.

In ancient times, Tyche was worshipped as the deity who presided over city and individual prosperity. The daughter of Oceanus and Tethys, Tyche is one of the three thousand Oceanids. Today, Tyche is known as Lady Luck, being called on for contests, competitions, and gambling.

Her symbol was the horn of plentiful, now sometimes used at (American) Thanksgiving. It was filled with nuts, berries, fruits and all the other gifts she would bestow on you. Holding a rudder, she was conceived as the goddess guiding and conducting the affairs of the world, and in this respect she was sometimes called one of the Fates; with a ball she represented the varying unsteadiness of fortune—unsteady and capable of rolling in any direction.

Retrieved from "https://camphalfbloodroleplay.fandom.com/wiki/Tyche?oldid=1422297"
Community content is available under CC-BY-SA unless otherwise noted.