I, your mother, have a disturbing news that you must hear out. You see, I have kept a real fountain of youth, which is the Trevi Fountain in Rome. Its pristine waters give a surge of energy to those who drink, or even swim, in it. However, Geras, my opposite number, is causing trouble once again. He has cursed the fountain to inflict sickness and age to the patrons at an alarming rate. Now, I want you to counter the curse, seeing that you have experience and power far greater than your siblings. It should only take a lot of energy, prayers, and drachmas to undo it, but I assure you that you will help a lot of people by doing so. I have asked Iris to lend you a few bags of drachmas from my savings, and you have to pick them up in Florence, just outside the Palazzo Mozzi (she is experiencing delivery problems in Rome at the moment). As soon as you turn things back to normal, the fountain will lose its blessing by my command, and will be transferred to a new location, far from Geras' prying old eyes. I wish you and your friends good luck. 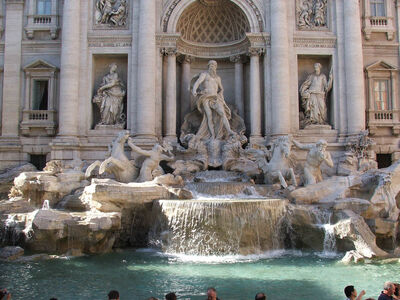 Geras has cursed Hebe's fountain of youth, the Trevi Fountain (see picture above), to cause sickness and aging to those who drink and swim in it (He and Hebe are opposite numbers, rivals and mortal enemies, so we don't really need a reason on why he did it). Hebe commands Audie to undo the curse by blessing it with his powers, coupled with a shower of drachmas and prayers (as tribute to Hebe and whoever god owns the fountain's very water). Having stayed and trained at camp for about 3 years now, she has chosen him to conduct the quest. As soon as he undoes the curse, Hebe will transfer the power of the fountain to a new, yet unknown, location elsewhere, as a preventive measure against Geras.

Note: The numbering will also be the usual sequence of posting.

By Youth's command, four heroes left to roam--
In search of the toxic fountain in Rome.
What was expected will not save the day,
Yet a accident shall be a blessing--
In exchange of one's dear treasure to pay.

During their encounter with Procrustes, they lose a lot of their drachmas in order to bribe him, meaning the remaining amount isn't enough to counter the curse of Geras. In an attempt to do something, Audie semi-accidentally falls over the fountain while it is still impure, and he ages not only physically but also mentally. However, because of what he did, he is able to complete the blessing, at the cost of his own youth.

Retrieved from "https://camphalfbloodroleplay.fandom.com/wiki/Unholy_Fontana_Quest?oldid=1447075"
Community content is available under CC-BY-SA unless otherwise noted.