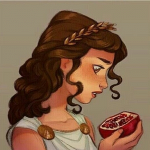 Persephone. Still the goddess of springtime and flowers. Queen of the Underworld. Wife of Hades. Appears in several books and myths. Pretty.

She didn’t want this to happen. I mean, she adores the guy, but Hades kidnapped her first, and made her live in his Underworld palace. Look, that might seem cruel, but compared to what his brothers, Zeus and Poseidon, did, he looks like a softie. Only then Persephone fall in love with him.

Zeus and Demeter. You see, Zeus wasn’t married to Hera at that time, so he sought out for Demeter, since he had recently ate his last wife (yeah just the daily life of a god), Metis, sand he was bored. And so he found Demeter doing her plant stuff and decided to ambush her. Demeter turned into a form of a snake to escape from him, but Zeus could also shapeshift, therefore he seduced her in a nearby snake hole. Demeter couldn’t get out, because the hole was too small and Zeus was blocking the exit, so later a very angry Demeter gave birth to Persephone, who became the joy of her life.

In some myths, Hades asked Zeus for permission to marry his daughter, Persephone, and Zeus told him to just kidnap her, because that was how Zeus did it. In this version of the myth, it was said Zeus made some flowers appear and led Persephone, who was picking the flowers, really far from town, until she was somewhere she didn’t know. Then Hades made the earth open, flew up from his chariot, grabbed Persephone, and went back in the Underworld. In other versions of the myth, it was said that Persephone spotted a beautiful flower and picked it, causing the earth to open and led to Hades’ kidnapping her.

Persephone is the goddess of springtime and flowers. She also plays a good role in being the Queen of the Underworld.

Persephone's a faithful wife. Despite Hades' kidnapping her, she really does love the guy. I did mention that, did I? Also, here's some proof. That two rare times when Hades actually fell in love with somebody who wasn't Persephone? Persephone found out about his scandal and said something like, "Either she goes or I go!" or something along those lines. The other time when Hades found a beautiful naiad? The naiad didn't even stand a chance. Because the naiad was a daughter of the river spirit Cocytus, she was trapped in the Underworld, and she yearned to go up into the mortal world. Hades promised her to bring her there, and he did, until he remembered about his wife Persephone. It was springtime, so Persephone was probably in the mortal world, picking flowers or whatever. Hades chickened out, and Persephone discovered where the naiad was, so she turned into a mega sized Persephone and stepped on the poor naiad and smeared her across the hill, where the remains of the naiad became the first mint plants.

I get you buddy. Persephone is pretty hard to pronounce right if you don't know how to. Some might say Per-se-phone. But its actually Per-SE-phon-I. Yeep. Its Per se phon(e) i. If its too complicated, its okay. I don't really mind cause I don't know how you speak.

Sometimes in life, you need a splash of toxicness, and your life shall be complete. Send an owl/IM!

You're here to know about me. I know. So, again. Hi,<insert name here>!! I'm 0ToxicPersphone0, sometimes known as 0Toxic0 in my characters' pages or WB cause it's shorter.

I'm a regular fangirl (yes, I'm a GIRL) and student. Which means I have homework. Which means I don't have the computer all the time. Mostly I do, because I'm okay with my studies, but sometimes that homework pile (I'm looking at chu Athena >:|) is WAYYYY too big for my taste, and so, bye computer :(.

Most of the time, though, I get the computer. But unless I'm REALLLLYYYYYY inactive of in need of a break, I'll put the template thingies and hope it helps :D

Also, I have done a recent collaboration with my friends 2Nyx's Nightmares2 and Thehephaetusfireflickers (ye we're from the same school so..)

we shall all be inactive due to a upcoming study tour we have, so our collab acc “TheMoon, Fire and Rain..” should also be inactive for a while.

Your rainbow is strongly shaded violet.


What is says about you: You are a creative person. You appreciate beauty and craftsmanship. You are patient and will keep trying to understand something until you've mastered it.

<a href="http://spacefem.com/quizzes/rainbow">Find the colors of your rainbow at spacefem.com.</a> (This is strangely accurate..except for the patient part. I am NOT patient. With things like math.)

-Percy Jackson and the Olympians!! (Obviously)

-The Heroes of Olympus!! :D

-Magnus Chase and the Gods of Asgard!!

-The Trials of Apollo!!

(I am annoyed and waiting for [The Tyrant’s Tomb])

~She can always roleplay because she’s always active (>:3) so if you want to roleplay with her just message me the venue :D~

If I'm inactive for a couple of days, it means I'm INACTIVE. Mostly it might be from school or something, but INACTIVE. If I do come back, though, I'll reply to all of my IMs (even though there may not be much).

TRY NOT TO CRI CHALLENGE

ITS SO HARD THIS IS MAKING MY HEART BREAK

OH MY GOSH ITS SO SAD

Assuming you survived those blocks of text (read: finished reading)  CONGRATULATIONS!! YOU MADE ITTTTTT :3 (lol ;-;)

Retrieved from "https://camphalfbloodroleplay.fandom.com/wiki/User:0ToxicPersephone0?oldid=1794983"
Community content is available under CC-BY-SA unless otherwise noted.