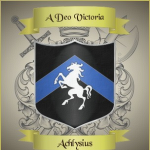 Well, hello there. Welcome to my page.

My user-name is Achlysius, and my name is Max.

I live in Indonesia (yeah... that big country in South East Asia with a big gaping hole filled with water smack dab right in the middle of it), more commonly known as Singapore's huge neighbor, Malaysia's annoying neighbor, Brunei Darussalam's poor neighbor, or maybe even just as 'the country where Bali is located'.

English is not a first language or even a compulsory language here, so it is kind of a challenge to for me to role play using English.

My favorite goddess in Greek Mythology has always been Hestia, although she never had a story of her own.

This is also my first time joining something for Role Playing. I hope I can do this... *nervous*

I've never been good with acting in real life, so maybe playing a little role playing will help with that.

So, yeah, nice to meet you all. Please be kind and lets role-play together.

Anson Benfield
My very first own character, yay! Well, I just pulled him out of my imagination, so I don't have any idea whether I'll really like him or not later on, but I do hope I'll be able to act him out properly.

Sillektes
My second character. Again, yay! This one is a bit... too close to my own personality. I have to make him a little bit psychotic to make sure that he has at least one different personality trait from myself.

Retrieved from "https://camphalfbloodroleplay.fandom.com/wiki/User:Achlysius?oldid=919306"
Community content is available under CC-BY-SA unless otherwise noted.