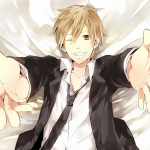 Hi as you can see my name is Ryan. I have a wide range of interests including greek mythology, jewles, and reading. One thing that I cant stand is sports, if you ask me anything about sports i will not be able to answer it.

One of the things im horrible with is spelling so if you see a spelling mistake on something i posted, do not mention it, at all.

Im usually on chat at different times of the day, and if im not on chat here then check Chatango, the user name is the same as here. Thanks for takeing your time to read this and if you want to get to know me better just ask, i dont bite...much.