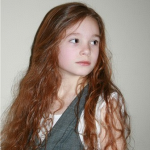 Percy Jackson and the Olympians and The Heroes of Olympus are two of my favorite series EVER! The other three are Harry Potter, 'The Kane Chronicles, and The Ranger's Apprentice. Warriors also previously held a place of fame, though that was a while ago.

You know my favorite series. As for music, I'm mostly into hymns, because they tend to be softer, sort of. I don't like stuff like heavy metal. So, my favorite specific songs are Ode to Joy and Carol of the Bells, as well as Kumbaya. I taught myself the first one through a hymnal and the last one by ear. My favorite genres are native american and Indian music. My hobbies are playing on the computer, reading, writing, and singing. I also like to cook, and sometimes I get into this weird mood where I pretend to be some girl whose made this whole life in the woods. My favorite animals are horses, unicorns (because of my dad's book, The Unicorn Prince, unpublished as of yet), dolphins, and pet rats. Not stinky, germy sewer rats. Pet rats. Properly trained and cared for, they are one of the best small mammal pets ever. Of course, that's for people who can get past the tail, though there are tailless rats who simply need slightly special temperatures.

Retrieved from "https://camphalfbloodroleplay.fandom.com/wiki/User:LilyEvansSnape?oldid=345845"
Community content is available under CC-BY-SA unless otherwise noted.