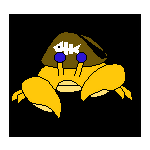 James started out as a better version of myself. As I RPed him his personality evolved a bit though. He's a lot braver than me and less lazy. In hind sight, he has a few similarities with Spider-Man, my favorite superhero. That was completely unintentional, but I still think it's pretty cool. This character has actually been around since before I joined the site. Back when I was considering making an RPG style PJO fangame with original characters, he was one of the ones I invented. I long since ditched the project, but the character lives on in this site.

I haven't really RPed Kate much. I'm not too sure what to do with this character at the moment. Her past intersects with Strike's. They used to be friends and she actually gave him the nickname that he now goes exclusively by. She was never supposed to be an actual RPable character, but just a piece of Strike's tragic past. However, when I was researching the Nemean Lion for Strike's backstory I found some interesting information that got me thinking about the possibility of her surviving without Strike knowing. It was too good of a plot twist to pass up.

Strike might be my favorite character. My goal at first was to create an angry and edgy character, but I quickly decided to instead make him a BC character, but as likable as possible. He still gets angry at people who do not return his respect, but that situation hasn't come up yet. He is with Josie who belongs to Mel.

Kuroi was created for a contest. He didn't win, but I was still pretty happy with his concept, and decided to put him through claiming. I also had to create his powerset, because there wasn't one for children of Perses prior to Kuroi. Of all my characters, he is probably the most dangerous.

Retrieved from "https://camphalfbloodroleplay.fandom.com/wiki/User:Maelstromis?oldid=1367020"
Community content is available under CC-BY-SA unless otherwise noted.