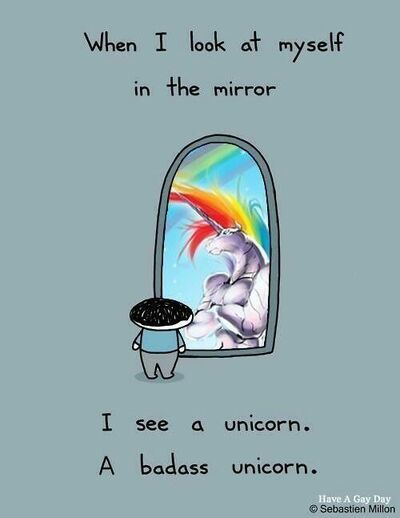 Wikia: This is your user page.

Wikia: Please edit this page to tell the community about yourself!

Nata: Tell the community about myself? Do I have to?

So... following an amusing chat discussion some time ago, I made a personal chat bubble. I think it gives a pretty good basic description of me.

You may recognize my word bubble's avatar if you've ever played Robot Unicorn Attack. That's actually one of my close relatives who bears some resemblance to me. (I'm more winged and stalkerish and doomy. And my horn is a sparkly pink.) You might also recognize my place of residence. Heck, maybe you even live there! Even though Procrasti Nation's area is very limited (they promise they'll expand the residential areas tomorrow), its population is very large, leaving it with a high population density that's perfect for concealing a winged robot stalker unicorn of doom like me when I visit your planet. (It was either that or the Amazon. I didn't feel like staying in the Amazon.) Since many people of Procrasti Nation are Internet-savvy, they just assume I'm a fantastic Robot Unicorn Attack cosplayer and don't question me too much, which is totally the definition of concealment. This is one of Hidden's fabulous maps that shows where Procrasti Nation is: linkety link If you ever need a neutral safe haven in the scary world of chat, come visit me here! :D

If I left out any essential information in that bulleted/square list above and you are desperate to know, just tell me on my talk page and I'll see if it's not classified. Okay, now time for some less relevant stuff that I feel like putting in a separate bulleted/square list! :L

You, the mortal known as Nata Roebot, have been given the blessing of friendship from the mango goddess herself. This means you have gained her favour by tolerating her... strange behaviour and she has deemed you worthy of her friendship.

The handwriting changes starting here. It looks more cheerful and less stoic than the message above.

Haiii, Coco~! Sorry for the straight-to-the-point and stoic message above. One of my more sour mango servants wrote the message and yeah. >.< But you're a really awesome friend and I love chu. Sure this message might not be unique from user-to-user but my wub for you is def. special and only for u.

Thankee, Catty! ^ω^ Though I must say that I am a fantabulous unicorn, not a mere mortal (though mortals can be fantabulous and significant too)~ :D

Thank you so much, Manololololololo! Aww, this badge is so sweet, and Book of Life is freaking amazing too :'DDD

Hello Besty!!
Congrtulations! You've earned a place in my Heart. You've caused our frienship to burn bright, and fly to the stars. In other words, you're an amazing person, whos earned my friendship, and I will always care for you. Even if our friendship sputters out of control.

xDDDD This gif is amazing and your badge is awesome, Games! Thank you so much for making my profile page a more explosive place ^_^

Hai there!
It's seems you have earned yourself the best badge anyone can earn, the Pichu Badge, the badge that shows that even though I'm a bit weird, I still have friends... I think! In other words I think of you as my 'Pichu Brother'

Oh my goodness, 3 badges in such a short amount of time! :'333 Thank you for your badge and its incredibly adorable gif, Pichu!

Nat-twin muchos gracias for your "Owl" and its wonderful cat-containing content! xD

...Galoshes, Omniverse, I'm pretty much laugh/crying because your badge warms my rainbow metallic unicorn heart and I think it may be melting slightly but oh well it'll be alright :'DDDDD Thank you thank you thank you it's wonderful and I'mma just gonna curl up and smile for a few days kthxbye~

Oh hey look, a wild Christmas gift appeared! :D It's that time of the year again! Time for candy canes, Christmas lights, carollers, and gifts galore! It's also the time for little kids to learn that Santa isn't real whoops. And here's my gift to you! You have been able to endure my insanity, drama, addiction to mangoes, and all around annoyingness, and for that I thank you. If I could, I would travel to wherever the heck you are and give you a well-deserved hug! But unfortunately, I can't. But who says we can't give virtual hugs? So here ya go~!

But of course, who would forget a virtual pizza?

Everybody loooooooooooooves pizza! Well, except for an odd bloke but whatever. Anyways, I love you and never forget that. If you ever need anyone to rant at, I'm your mango. c: I'm always right here. Once again, have a Merry Christmas!

Hmm, how to shamelessly self-promote? *gestures mysteriously* You will go check out my blog. You will do so right now. You will leave a comment. You will listen to my mind-trickery. Uh, I mean, this is NOT mind-trickery. I don't think this is working. I'll stop before you call the psychiatrist. No, really, no need to call. Come on, really, you had to call them? Whyyyyyyyyyy *flies into distance leaving a fading trail of y's behind*

The first post that I wrote was a power set for Chat Lurkers (which are defined within the blog so go there). Eventually I might write more power sets for Chat Stalkers, Chat Pervs, Chat Serial Killers, and the like... >:D

If you're one of those pesky l'il humans who keep asking, "But, Nata, what are you REALLY???" because they can't handle my unicornness *sparkles indignantly*, you'll like meh second post. Read all disclaimers first, plz, and leave commenty comments because I like them and they are (usually) nice! ^_^

My third post is aimed right at ya, newbs who may be reading through my profile in fascinated horror, and explains how to send PMs in chat! I might make a fourth post on how to get a fancy background and/or chat hacks, but I'm often either busy or lazy so we shall see...

1. Make a bedroom page for Aria Made the page, and a fair use bedroom template while I was at it~

2. Work on le quest with James and Summer and Ash and Fate This quest is on hiatus. Another quest, however, has been approved and will begin sometime around the start of 2017!

3. Make a sandbox to which I will move this list so that it doesn't randomly clutter up my page User:Nata Roebot/Sandbox is a thing now :D

4. Fix my laptop so I can RP again Eh, it's held together by a piece of washi tape, but it works just fine now

5. Make a word bubble for Rory

6. Make a personal WB or character page template that has an image background like Kevin's (gotta git gud at coding)

8. You know what? It's about time I revamp my user page. I haven't changed its format since I arrived on this wiki, and it reflects the me of 2 years ago, not the me of now. Let's do this!

9. Find an older-looking model for Aria

10. Since my username is Nata Roebot and I am a chat mod, I could look into creating a bot account for logging chat and performing various small tasks around here... to the pybot help section I go!

11. Neaten up my Sandbox and Laboratory page coding, and possibly rename them to something more creative

My Characters/RPs in Various States of Deadness

Retrieved from "https://camphalfbloodroleplay.fandom.com/wiki/User:Nata_Roebot/Userpage_Archive?oldid=1741045"
Community content is available under CC-BY-SA unless otherwise noted.