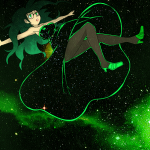 aka Your Lovable Neighborhood Orphan

I've got a lot of questions

I've got a lot of questions

Where did it start, these feelings inside of me rip me apart

I never thought my mind could get this dark

Where did it end

My satisfaction is gone with the wind

Stories are filled with illusion and sin

Wiping my eyes at the touch of a pen

The fuck is a friend

Let me break this in

Passion will eliminate all your friends

All because you were being selfish again

Fuck, you're a mess

Think you're gonna blow, you don't know who's next

Blah blah meds over, nothing but dread

I'm losing all my peers

This sea is made of tears

I take a look into my future, all I see is fear

I had the rarest knowledge ready for your open ears

Nyxil is a son of Nyx (duh) that bears a curse by Morpheus in that his appearance can randomly change. He doesn't like threats, even empty ones. His grandmother is Theia (titan goddess of sight and shining light), and she basically raised him, so he repays the favor by being her priest. Nyxil is technically single, but...

Cynthia Amoré is a daughter of Thesis and the leader of the Veritum Unitum. She suffers from short term memory loss on top of the usual ADHD and dyslexia of demigods, and despises the gods for putting her in such danger, abandoning her, and not saving her father. She's lived in the Sanctuary since she was 12, and has practically grown up on its teachings. Cynthia is single and open to a relationship, but her duties as faction leader come first.

Graciel Hall is a Limos kid that got hit by a car. She bargained with Hades for her life back by tricking Persephone into staying in the Underworld, making herself the reason behind Groundhog Day. She's kinda pedo-y. She looks 18 and all, but she's been cursed not to age and is actually in her mid 20s. Either way she tends to hit on people under even her physical age. She's single and swings either way. But is also currently dead, so good luck.

Leon Mitchel is a son of Eurus from back when there was a Eurus cabin. He left camp in 2013 after about a year, and landed himself an internship at Aeolus News Network. He's now worked his way up to the position of Executive Vice President of Content Management, which makes him one of the business's top dogs with only Aeolus himself as a direct superior. He's Aeolus's most trusted and longest-lasting employee (most interns are fired on a whim within minutes), and is effectively the Master of Winds' right hand man. Clearly, Leon's a working man, and doesn't hang out around camp. He does visit on occasion, though, and is technically a priest of Aeolus. He's also married to a wind nymph.

Lake's a child of Apollo. Keyword child. Not son. Not daughter. Lake is the only known medically zerosomic person in the world, and is thus completely genderless. They spend their time at camp making music and generally avoiding human contact.

Naladæmon ("Nala" for short) is a gem nymph. She was created millennia ago by Plutus to serve an ancient king. Her life is tied to a little gem, and she is sworn to serve the one who holds it. Currently she's unowned, waiting for her gem to be discovered outside camp. If you're interested in having your character find the gem, send me a message.

Ollie is an Osprey Guardian created by Hephaestus. He apprenticed in Hephaestus's forge for a few years along with his "sister" Avery, before being sent to camp. He's a reckless thrillseeker, always looking to push the boundaries of what is possible... and safe. He's straight and single.

Xer's Midas card of Friendship
I see you have accepted a contract with us. This Card signifies you as a person i value as a friend. Make use of this Card in the future. As this shows you are a valued friend of your District version of me, your neighborhood friendly Rabbit. PEACE OUT!

Sparky's Affection
Greetings my friend or atleast you should be if your viewing this I present thy reader (personal badges are for hipsters) with my badge yes yes I know your gasping in shock and joy enjoy the fake internet badge with your fake internet points and go ahead and brag to your friends about your fake internet badge with the fake internet points because you have earned it for putting up with me the stupid selfish slightly insane chat lurker and when your finished reading this know I would rather give up Tali Zorah nar Rayya then you.- <3 from --User:Undead Sparkz

You, the mortal known as Toxyca, have been given the blessing of friendship from the mango goddess herself. This means you have gained her favour by tolerating her... strange behaviour and she has deemed you worthy of her friendship.

The handwriting changes starting here. It looks more cheerful and less stoic than the message above.

Haiii, Cake~! Sorry for the straight-to-the-point and stoic message above. One of my more sour mango servants wrote the message and yeah. >.< But you're a really awesome friend and I love chu. Sure this message might not be unique from user-to-user but my wub for you is def. special and only for u.