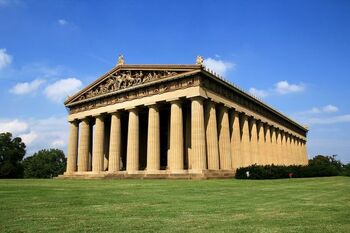 Hello everyone! After who knows how long, this is a blog that serves to consolidate all information about New Athens into one neat little package. If you do have any more questions that remain beyond this, please do not hesitate to leave them below and myself or someone else on the admin team will answer them for you!

The Background of New Athens

What's Happening to The Nearby Town?

The Nearby Town pages won’t be deleted! Even though, from an IC perspective, the locations themselves would have been destroyed and replaced with new buildings, none of the pages are going to be deleted due to the rps on the pages. This is due to the fact that, since the wiki’s creation, the Nearby Town has been a large part of our roleplay style. Instead, there will be a template put onto each one that denotes that the page is an archive and thus can’t be roleplayed on anymore.

The template is as follows;

Whilst from an OOC perspective we can still see what the pages once were, IC characters can only reminisce about their times going to the Nearby Town, making it become a distant memory that’ll slowly leave as Campers get older (save for the few immortals, of course).

The OOC explanation for the creation of New Athens and the ceasing of roleplaying on Nearby Town pages, is due to the amount of comments on the latter's pages which render it unusable. That's a little dramatic, of course, but since comment roleplaying is an aspect of our wiki that has remained in tact since the creation 9 years ago, it makes sense that we'd eventually need to... revitalise some pages. As the admin team doesn't want to delete any comments, the creation of a new location that serves the same purpose as the Nearby Town seemed the most logical explanation.

And thus, New Athens was born!

Following the Champion of Othrys’ shockingly successful conquest of the Nearby Town, Camp looked to expand its defence system beyond the borders of the Camp grounds. There were many debates within Camp on how such a thing would come about but the destruction of the Nearby Town focused eyes in the direction of establishing an even higher demigod presence around Camp - sacrificing the risk of more monsters being present for the added security of more demigods with experience nearby. With their main place of recreation destroyed and communication recently opened with Camp Jupiter, Camp Half-Blood put their efforts into creating a New Athens.

Aiming to be a haven for the older campers to reside when feeling too old for Camp and a place for older non-cabin demigods to live, New Athens serves as a secondary Greek Mythology hub alongside Camp Half-Blood. Shrouded by the mist to appear as a desolate ghost town of ruins, New Athens is a place for any demi-child and clear-sighted mortals.

Fate of Nearby Town Pages

As mentioned above, the Nearby Town pages will remain up but they will be locked for commenting and have the template above put on them. You'll still be able to view all the old roleplays but you won't be able to post on them anymore. Likewise, the navigation bar at the top of the wiki will change to accommodate the change in locations.

Though a lot of ideas had been thrown about, New Athens was chosen as a way to not only enrich the wiki canon that we have established but it also made sense at the time. For some context, Roman Inclusion was very much a possibility and it seemed natural to have a New Athens to match New Rome. Likewise, the admin team looked to make the Nearby Town into something more substantial than an unnamed location that, whilst all of our characters are familiar with, had no true defining qualities. Thus, New Athens seemed to be the most obvious solution.

New Athens is billeted as a safe haven for all demi-children who are loyal to the Gods. That is an intrinsic part of New Athens as, after all, it was those who had dissented from Olympus' guidance that destroyed the Nearby Town in the first place. Within New Athens, demi-children are able to raise their families, grow up and assume as regular of a life as they can. It is not mandatory to move to New Athens, meaning you can grow up at Camp or even move out to the world beyond CHB and attempt to live a mortal life. Quite simply, New Athens is another option available for the demi-children of the world.

As mentioned above, the New Athens character spot count will be combined with the Camp character count, given that both sets of characters are aligned with Olympus and the Gods.

The Broken Covenant & Champions of Othrys?

Naturally, in day to day passing of New Athens, a member of the Broken Covenant or The Champions of Othrys may find their way into New Athens as the Themis children check is for those wishing to move to New Athens. The admin team does, however, ask that this does not happen as we establish New Athens. It'll be much easier to establish New Athens first and then delve into how it can be used as an expansion device.

These are only some of the locations proposed to be included in New Athens. Any more suggestions would be greatly appreciated and welcomed!

This FAQ will serve to answer all the questions in a TL;DR manner.

Is New Athens a replacement for the Nearby Town?

By all accounts, yes, New Athens will serve as a replacement for the Nearby Town. Edits to the navigation bar will take place in the near future.

Can our characters still rp in the ruins of the Nearby Town?

Can our non-cabin godparent characters be roleplayed at Camp?

Yes they can! The only stipulation is that they can't live there full time. Given that this wiki boasts a fair amount of relationships amongst characters, naturally we'll see some New Athens characters staying over. Bottom line is, yes they can, but they can't be there all the time.

This has yet to be discussed but it is definitely an option if people want it to be!

Will legacies be exempt from the no under-eighteens at New Athens rule?

Should we figure out a way to implement them, there is the possibility that they will be able to. As the subject of legacies has not been looked into, this cannot definitively be answered.

How will resident pages work for New Athens characters?

When you're looking to make your New Athens character's house or apartment, it will be a subpage of their character page, much like we do with rooms in cabins. This is so it's all streamlined together and you can roleplay in the comments.

Retrieved from "https://camphalfbloodroleplay.fandom.com/wiki/User_blog:EvilhariboMadness/New_Athens:_A_Dummy%27s_Guide?oldid=1808664"
Community content is available under CC-BY-SA unless otherwise noted.