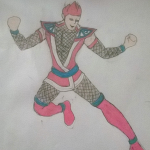 Thank you for your edit to the Claiming:Camp/Tyler Young page. As you are new here you start out at Entry Level, if you haven't done so already please visit the Getting Started page to learn how to get your character claimed, and what to do from there. As an entry level user, you are allowed one character spot.

Yay Affleck! Your claim was accepted!!! Have fun RPing Grahm! Congrats "If life hands you a lemon, throw it at someone!" DrXax

hey just a side note but you DONT need a prophecy to start the quest ok? its not a requirement you can just start it now if you want too

Sorry for laye reply but I like the idea :)

Oh ok :) And yea they're telkhines

I would like to thank you for your help.

Hello there. I was wondering if it would be possible for you to change either the font or the font color of the text you used in word bubble of your chars Felix and Alec Gray, particularly the part of the Name of your characters and the name of the owner(s). It's quite hard to read and pretty much negates the point of having the name of the owner and the char there. You need not redo the entire thing though, just the font/text color of the name and owner. It's not an immediate change that needs to be done so you don't need to do it now :) It's just a reminder because readability is one important factor here when it comes to coding.

Ohhh, well, considering that the the deity for whom the chars are children of isn't really sure/approved yet, I think it'd be best if you were to put the wbs on a sandbox first rather than an official template. That way, we can avoid any mishaps in the future. Is that fine with you? :)

A question on the Twins

When do you plan on having them made? Just asking when, to know when it would be a good time to have my photographer claimed

Ok, just checking. Would it be ok if I have the photographer pt in claiming process tomorrow? Asking cuz I'm pretty sure thats when I level up, and can thus have one more demigod XD

Wanna take a peak at the photographer? I'm not done, but it's what I have so far. I ad to get creative about the gods to create a demigod with an affinitive for photography lol YorkieWolf (talk) 05:15, March 18, 2015 (UTC)

No worries, just read her personality lol. Whether they are friends or not, she takes her job seriously

Good day, Affectos! We're currently in the midst of checking whether or not our User/Character Lists are accurate. Below is a list of all of your characters, as well as your prizes (both used and unused), and some other pertinent information. Please check that all information listed below is correct and accurate. If not, do message me with what's missing and/or incorrect. Thank you and have a great day!

It says you have a prize from adopt a newb, but our lists don't say whether you were adopted or whether you took on a newb. Please inform us of this so we can rectify the problem. Other than this, is our list accurate? If not, then please IM me with the corrections as soon as possible. Thank you!

This is the model I saw, which may be good for an older Tyler. His name is Matthew Lush and he's a youtuber. Since there aren't many pics of Tyler, and as a fellow young teen rper, I thought it might come in handy. The second link is a link to Jordan's model by the way ;)

Congratulations! Your character, Tyler Young, is now the new Lt of the Iris' Cabin. Why? Well, Shady's character (the previous counsellor) left, and you don't have any characters with positions; thus, it's now yours. Enjoy!Such is life~ lol.

Nah, chain's broken. As for why, Mel asked me to archive those old RPs. The RPs I've archived are before/on June 1 as the person last posted. Today's June 10, so I thought 10 days was enough time for a person to reply; apparently, I thought wrong. If you need yours back, which ones? Please pick them: Roleplay:Main_Forum/General. Such is life~ lol.

Made it, enjoy the title XD

Hi, I just want to let you know that your character, Tyler Young is the new head counsellor of Iris' Cabin after the former counsellor's character page had been archived. That's all, have a good day. :)

What happened to you? You are deadddd here >.<

That's okay, but try being active again when you can :3

Hey there! I'm Emma and I'm just going around, checking on things.

I've noticed that you haven't edited in quite a while. Traditionally, for users who don't edit for a long time, we archive their characters since they're not technically in use. If you don't make an edit or give notice of your inactivity, all your characters will be archived after a week (9/17).

Don't worry though, unarchiving characters are very easy and if you read this message after yours have been archived, just message me on my talk page and I'll restore them for you. That's all, hope you're doing well.

After going through the cabins, seeing as many users are either inactive, or just not here, Jacob Evans is now Lt. of Nike's Cabin.

I've noticed that you haven't edited in quite a while. Since you are marked as ‘Officially Inactive’, you’re given six months leeway before your characters are archived. However, that time is expiring by 1/11. If you haven’t made any edits by then, I would have to archive your characters.

Don't worry though, unarchiving characters are very easy and if you read this message after yours have been archived, just message me on my talk page and I'll restore them for you. That's all, hope you're doing well.

I would just like to inform you that since haven't edited in more than six months, all your characters have been archived, regardless of your 'Officially Inactive' status.

Also, as per the results of the new model policy, you have lost all rights to all your models, including reserved ones. If you ever come back and find that one of them are being used by other users, you will have to ask them if they’re okay with sharing. If not, then you’ll have to look for another model for that character.

If you wish to have all your characters restored, just message me on my talk page. That's all, hope you're doing well.

how long has it even been

Hey buddy, I don't know if you'll ever see this, but I was just thinking about you, and I miss you a ton. You might remember me as Yorkie? We used to roleplay all the time. Anyways, CHB is having a whole revival period, but hey if you're somehow still peeping around fandom, it would be dope of you to stop by.

Hope you're doing well my guy, and hope all the graphic design stuff is treating you well

This is the new generation  go away

Retrieved from "https://camphalfbloodroleplay.fandom.com/wiki/User_talk:Affectos?oldid=1807527"
Community content is available under CC-BY-SA unless otherwise noted.