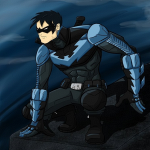 i replied on Felix's page

Welcome to the wiki

Welcome to the wiki alejandro. Name's Moodle and if you need help, just leave a message on my talk page.

Congrats! You have been chosen to join the Yellow CTF team. make sure you know the rules and whatnot. have fun!

You can (and should) post on the quest now.

Okay. SO your post on Lady Luck makes no sense. I had Jake IM your character to walk through the portal. So can you change it and make him just walk up to everyone through the portal? We're all waitin no you. thanks!

Hey, I'm not sure if you guys remember or not, but we have a quest. And it's going nowhere because me and Al are the only ones posting. It ends in five days, and we're at our first destination. Let's get it moving. Comment and be active, please.

Al, to you sepcifically, I was concerned about letting you join the quest. However, I am pleasantly surprised. Thank you very much for keeping up on it.

A compass will lead directly to the horse,

But an unruly god will lead it by force.

Take three others with you and go across states,

And be careful that you are not used as baits.

This qualifies as a B-Day present.

User:Comiclove|I Will Always Be Your Friend

First, edit this Iris Message, and click source, then copy paste the above weird text into Word/Pages/WHATEVER!!!

Then, Change the Comiclove parts to your username.

Then change the Quote text (I Will Always Be Your friend ((For User link) and the said person ((For talk)) to whatever you want. Next, the Font colours can be changed into codes like #000000, or simply type the Name.

You're all SET! just go to the arrow where it says your user name on a wikia page, and click on preferences. when you reach Signatures, simply copy and paste your code, click submit or whatever, and Congrats!

Al, the opnly reason I haven't posted on your quest was because no one else was. I'm not supposed to be the only one talking- there should be other having the conversations with me. I shouldn't have to post every other time, just because no one else is. And thanks for keeping up on my quest :)

Powers for Boreas cabin have changed

The powers for boreas have been changed, please make the necessary changes to your character's page. http://camphalfbloodroleplay.wikia.com/wiki/Boreas%27_Cabin BachLynn(Send an Owl!) 02:05, January 9, 2012 (UTC)

Deletion of the Leto Cabin

It was put up to vote to delete the Leto cabin, the powers being used were not based on what Leto was the goddess of, voting passed and the Cabin is deleted, see here see here , You have a few choices now, if your character was a female, you can have them join the hunters, or if they have a valid reason to join the BC, beyond that, they need to be killed or have them just leave camp peacefully. Because we feel bad for the inconveniance, the next character claim you make, you will be allowed to have your first god parent choice, no matter what, even if that cabin is currently full. Please message me, letting me know you have gotten the message and what you wish to do. BachLynn(Send an Owl!) 03:51, January 10, 2012 (UTC)

I haven't seen any posts in a week, what's up? Also, don't worry about caspian being on two quests, we'll just chalk it up as an oversight, it's too late now to worry about it.

Yea, I understand how that is, keep trying, I'll do what I can, don't worry, as long as you the leader are trying I won't pull it yet.

Hello please may i adopt Dion.

You can't have your charies up for adoption if you are leaving, we had that problem before, it doesn't work, so they will either be deleted or sent away.

You informed me, awhile back, you would be less active until possibly spring due to school, as such I marked all characters are not year rounders, with the exception of the counsellor, which you would retain unless challenged. Then today you make a blog, making a big deal about that you are in fact actually leaving, leaving is generally gone, if you had already informed me weeks ago you'd be less active for awhile, why make the blog, unless you are actually leaving. If you have no idea if you'll even be back this summer, I see no point in restoring your character pages. If you had wished to remain on the less active list as you were already on, as other users are, I guess you shouldn't have made a big deal with the whole leaving blog

What's going on with the horsing around quest? I haven't seen any activity on it in over 2 weeks.

I think we should add Alex and Kirk to Best Couple Name category in the VDA sig ups. Here's there name: Kirlexa. Tell what you think of it, if we should change it or whatever.

Can they be boyfriend and girlfriend?there is nothing wrong with love, there is wrong denay love someone. 01:01, February 12, 2012 (UTC)

Could you, when you have time, please add your charies back to the user/char forum, whomever restored them for you, didn't. Thanks bunches!

Do you want to roleplay at coffee shop with Klay and Bess?.there is nothing wrong with love, there is wrong denay love someone. 22:07, February 12, 2012 (UTC)

Here is chuz prezzie for being an awesome brother XD

The victors write history, the losers are wiped from it.

Hello there Alejandro, i was hoping that i could adopt your son of zues, Pwetty pwetty pwease can i have him? *Puppy eyes*

Yeah I challenged you for Lt Counsellor of Deimos Cabin and all that shizz. ♥Be brave enough to break your own heart♥ 23:33, March 9, 2012 (UTC)

First, lets finish the scene at Hypnos' cabin . Claws Out

k, thanks and you should go on my quest The Quest for the Forgotten Item with Kirk. Also sign my friends section on my user page! Whatever, Because I really don't care. 22:21, April 7, 2012 (UTC)

i think u deserve this! {{Ontario's Badge of Approval}}

So here is my approval badge ale. User:Travelg

Do you have a list of them somewhere? I think Ruby already took you off the user/char forum before I'd even seen your blog, so no idea if she deleted them or just put on them

Yea definitely, and if you could, make sure each one has instead of and remove all categories.

Alllleeeeee Your back for a short time! Can we talk tonight or something? Maybe around 9:30 or 10? I am the Ducky

Place? I am the Ducky

I'm on I am the Ducky

Wait a sec, are you coming back, cause I thought you were inactive but you've been posting recently so now I'm getting excited! Hey I just met you and this is crazy but here's my number so call me maybe ~ Carly Rae Jepsen

Nice saying you got there and I will in a sec. But also, I reserved Richie Nuzzolese when you didn't have him, but then you put him back on so I took him off so you can use him so can I please have him back? I dont want to die I sometimes wish I'd never been born at all -Bohemian Rhapsody 01:59, May 8, 2012 (UTC)

Mah Hubby no have my badge?

hey ale, come back on chat will you?

Here's my Badge for being a great friend!

she is reserved for you per request.

I posted on Felix :)

Hey, just a heads up, a rule has been added and it has been decided by Bachie, Lottie, and I that the animal nymphs will NOT be allowed to be demigods before. They have a back history, which will be copy and pasted from, and you may add to it. "long and lost" ~~ Minx the Banshee     09:44, July 20, 2012 (UTC)

Hello, official sign up for Lillith's Letter is up. If you are still interested please sign up in the requests section. Thanks, "long and lost" ~~ Minx the Banshee

Hello, if you are still interested in signing up for the second phase of Lilith's Letter, please visit: this page, and request a spot on a mission. "long and lost" ~~ Minx the Banshee

Are you interested in having a character on Lilith's Letter stuff? There's still a few spots open for BC charies we need to fill if you are, let me know ASAP

I was just wondering if I could adopt Rafael because I really only have one character and I am a level five user. I was going to make one, but I really like Rafael Cabrera. I would be joyous and grateful if you'd let me take your character.

Hola, get on chat faster 'cause I gotta go soon. >.

well three days ago i finished my claiming profile the last thing i got replied to was i had to specify how many thugs i fought as a kid. i changed it and still no reply and to top it off i got an email saying my file got deleted but when i clicked on it it was there. and will they tell you by message or comment whos cabin your in

Omedetou! you Recieved my Badge Thank you for being a super Good Friend ^_^ May The Gods Bless You :)

Posted on Felix and Caspian :)

I posted on her room and then you left

Ok, on it, if you ever need anything you know where to find me, good luck in everything you do *hugs*

Meet me on that chat

If you're going to copy coding from my pages, I'd appreciate it if you didn't put it on your pages until you've removed all the stuff from my character's information, there's still gifs and images and information on Gale's page from colum's

Hi Ale, it's Demi. I was wondering if you'd need the Less Active status. You've gone over 2 weeks without any activity, you see. So yeah, if by the 8th of June, you haven't made an edit nor informed anyone of your inactivity, your characters will be deleted.

Congratulations on getting to 2 years with the wiki! We hope to spend another great year with you.

Retrieved from "https://camphalfbloodroleplay.fandom.com/wiki/User_talk:Alejandro231?oldid=1418433"
Community content is available under CC-BY-SA unless otherwise noted.