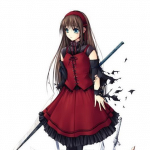 Message me!
Note from Demi:

When leaving a message, kindly add a new header (no matter how short your message may be) and do remember to sign any and all messages. Thank you.

Thanks! I'm so happy I stayed on this wiki! I thought about the early power thing and I think I'm gonna pick my child of Hades, Leah Winters. I guess that's it! Thanks again!

Thanks! Sadly, I was never adopted offically. A  friend helped me out, but I didn't actually use the program. I'm happy I stuck around!

Yeap :) You got that right

Thank you for returning my claiming page. I will get right to it then. Hope we will all get along well in this wiki. :)

Ok. Though, I can be shy to others, I will try to talk to everyone.

Yeah, except for the fact I got a famous model prize for the poetry contest I forgot to put on >~<.

I also have Avery Jacobson and I adopted Maxie. That's about it.

Don't judge me; I was born awesome, not perfect. Theawesomeperson202

Hey, Demi, it's Rid here. I was posting on User:Tatertat's talkpage and saw your question about if she was adopted or not. She was by myself and Bach. We also decided, since neither of us wanted the prizes after helping her, that Tatertat would get the prizes.

My dear, you have everything correct and up to date. Thank you for checking.

I adopted her from Ri.

Don't judge me; I was born awesome, not perfect. Theawesomeperson202

Yep, those can be deleted

posted cx Come with me.

Yes I am confirming it though I might not be on alot. Maybe about once or twice a week

Things to vote on, level 5 an up

Yeah, the info you have is accurate, the prize I got from Lilith's Letter Phase 3 and I have yet to use it

Yes I am, just I am sort of busy with my new job >.< so I haven't found the time to start it up again.

I would like to have that Less Active status Please. Sorry for not being so active, school os killing me >.<

== I am no longer Inactive

I've recently changed my mind about leaving the wiki, so I would appreciate it if you changed me back to a Semi-Active user on the User/Character Forum, since it's way too complicated to do it myself. >.< Thanks,

on Ailred Wolfskill's page, you marked him as dead on like 12 May, but Gruff was still posting with him on a quest later that May, is he supposed to be dead?

Demi, quick request: Do you mind deleting this character? The claim wasn't approved because of the history being faulty so this page shouldn't be up. If you can, that'd be swell.

PS: I find it funny how I'm typing like I'm writing and actual letter. *Sigh* Those were the days....

Retrieved from "https://camphalfbloodroleplay.fandom.com/wiki/User_talk:Demi-hunter13?oldid=1122405"
Community content is available under CC-BY-SA unless otherwise noted.