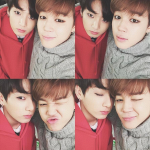 Hey, come on chat! I would like to meet you!

Hey there sofia, waddup :3 Just thought I'd let you know, for the word bubble, you can just make a template page and then insert the template. example, I would insert template {{Jansen}} onto my char Jansens, page. Also, it wont put the Bach wb template three category :) Anyways, thats about it, Have a nice day! :3

I would like to sincerely apologize for the delay in your moving up/leveling up. I can't promise that delays won't happen again, as I'm usually the one to level up new users, but I'm having a bit of trouble doing so due to a hectic schedule in real life. I will try my best to make sure that you level up on the proper dates.

Again, I'm sorry for the delay and any inconveniences that this may have caused you.

Congratulations on becoming a Level Five user! If you were a participant of our Adopt a Newb program, please tell me the name of the user who adopted you. Also, I sincerely apologize for the delay(s) in your level up. Luckily, it won't happen again, now that you're a level five user.

I'd also like to ask if you need the officially inactive status. You've gone 2 weeks now without any edits. Sadly, if you reach the 12th of August without making a single edit, the user team reserves the right to either archive or delete your characters. I truly hope it doesn't come to that, so we encourage you to be as active as possible!

As of today, you have hit 25 days with no activity or having notified someone of your inactivity. As such, your characters have now been archived and are no longer allowed to be roleplayed. If you wish to participate in the wikia in the future, kindly contact an available administrator and we will be able to restore your page back to the unarchived state, as well as noting that you are active again. Thank you and we look forward to see back on the wikia as an active user in the future.

I double checked your contributions, which states that the last time you made an edit was July 18, not including your most recent edit(s) which were made on August 21 and 22. Now, I left you a previous note saying that if you fail to make an edit by the 12th of August, your chars would be archived or deleted. Considering that the next time you edited was on August 21st, the archiving of your chars and your getting marked as inactive or user left was justified. The only course of action we can do now is to simply un-archive your chars and return you to the lists.

I'm afraid to say I can't spend as much time as I would like on the wiki and so can't do the task yet. If you leave a list of the chars you want back on my user talk, I'll be sure to do the task before the week ends. :) As a precaution though (as I'm really terribly busy), you can always message Kevin or anyone else on the admin team (but Kevin is the most reliable when it comes to users, their chars, and the lists (apart from me of course xD)).

Retrieved from "https://camphalfbloodroleplay.fandom.com/wiki/User_talk:IStarShine?oldid=1608128"
Community content is available under CC-BY-SA unless otherwise noted.