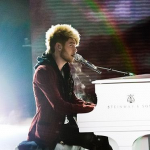 Thank you for your edit to the Forum:Ryan Howell page. As you are new here you start out at Entry Level, if you haven't done so already please visit the Getting Started page to learn how to get your character claimed, and what to do from there. As an entry level user, you are allowed one character spot.

Can you get on chat, or maybe on my wiki? http://earthandlegend.wikia.com/wiki/Special:Chat   Slay Talk  "Shadows wonder why we scream."     5,915

Though your blog may be well intended, this is an RPG wiki, not a place for stuff like that, that could be taken highly offensively by some of the users here who are of different backgrounds and faiths.

I just had a sudden urge to tell the world. Like when you fall in love for the first tine, you just want to scream it, but thanks for pointing that out, I'll do something about it. :)

Hey, I know, I was a teen once too, unfortunately this wiki represents such a vast array of nationalities, cultures, beliefs, backgrounds. I would keep that kind of stuff to talk pages with users who you know are open to it, and private messages on chat. Unfortunately where there is such a vast array of different religions, each one thinking theirs is the right one and everyone else is wrong, religion is a very very volatile subject, especially when you are in such a diverse group.

Yes, I understand. I'll do what you say and keep it to talk pages. If I offended you then I'm sorry. The good thing about being a teen is that you can learn from your mistakes easily and have people like you to point me straight. If I do anything else that puts me out of line, let me know and I'll fix it. I still have a lot to learn, especially since I live in a place where nearly everyone shares the same religion. *Smiles*

But I'm trying to prevent it from ever happening. I don't want to offend anyone or start a war because of my blog post. I had good intentions, but I didn't realize what it could start.

Actually the policy also states that blogs must be wiki related, unless permission is given. As well as the fact that I know a lot of the user's here fairly well, and a few really well, and I just wanted to avoid a fight if possible, it hadn't offended yet, but I do know users who it may have offended. I mean, why wait until you are in the middle of an all out wiki fight, if it can be avoided? Like Iesos said, why not prevent it before it happens. It's not exactly unusual for religion to be a volatile subject, which is why we try to keep religious and political talk in chat to a minimum, they are both heated subjects that often lead to fights.

I'm just hoping nobody read that would be offended. But at least one good thing came out of it, Slay and I would've never met and maybe in time we'll find others with the same faith.

This is for you, Iesos. Thanks for everything :D

Hey, sorry if you don't know this but if you do can you tell me how to make a badge or really any sort of template because when I look at what someone does to make one I just get confused.

Retrieved from "https://camphalfbloodroleplay.fandom.com/wiki/User_talk:Iesos?oldid=1573143"
Community content is available under CC-BY-SA unless otherwise noted.