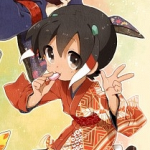 Thank you for your edit to the File:Charissa Granville image.jpg page. As you are new here you start out at Entry Level, if you haven't done so already please visit the Getting Started page to learn how to get your character claimed, and what to do from there. As an entry level user, you are allowed one character spot.

'Lo there! Hehehe new faces... er, I mean, new comers! Yay! Welcome to the wiki! =D If you have questions, just leave me a message! Or if you'd like to rp if you already have a character ;D

Hey, Jack! Just wanted to say that you're doing good. Don't give up with your claim, okay? :)

Yes, demigods can have children. There isn't any rule that says they can't. It was also proven via the Heroes of Olympus series that half-bloods can have kids. As for what they'll be, however, it wasn't specifically said. However, seeing as gods do not have DNA, I believe it would be safest to say that the child will be mortal. I'm not really sure about this though. You can try asking someone else to gather a second opinion.

Will you happen to need our Inactive User status? You've gone over 2 weeks with no edit and with no notice that you have other priorities which will keep you from getting to the wiki. If, by the 13th of December, you have failed to make an edit, your character will be marked as "archived" and will no longer be allowed to rp. In addition, you will not level up, meaning you will have the same number of char spots as you do now, even though you've been at the wiki for quite some time.

Alright, so you're still active then. Now, with that cleared up, there's still the issue of your character. Kindly make her page as soon as you can. Thank you.

Hey there Jack! I don't know since when your char got claimed but just wanna say CONGRATULATIONS! :D

Doesn't matter. We're all ears so just ask away ^-^ haha! Hope you enjoy your stay in the wiki!

Oh... sorry about that. I have no knowledge of how to be a priest. BUT! You can ask the other admins for that ^-^

Sure, just add heer to the nyx cabin count under Priest/priestess, then if you notice on the nyx list, there's a couple of Nyx demigods at camp that are also Priests/Priestesses elsewhere, so whatever your char is a demigod child of, do what they did, in ()'s next to their name on the member list, note who they are also priestess of

Sorry bout the two-days-late reply, but I got around to posting on my char.

Holy Hephaestus, Jackalicious! Son of Posideon and Priest of Selene? How are you gonna pull that off? Didn't Apollo say to Nico in the third book about how after Selene and Helios faded they took over as the sun and moon goddess? How about a priest of Pandia for a moonlight theme? I'm just suggesting this, of course, :)

Maybe Jackalicious.. maybe.... But it'd have to be a girl, right? Cause Artemis had that thing against males. I'd totally ask Bach about it though.

He won that contest awhile ago, though. It's because (in theory) the Theia is still alive. How about picking a titain or something. A friendly titain, like Calypso or whatever. How would Selene still be around? Like, maybe they think she faded but she was actually captured by some un-named villain and everyone thinks she's faded but a priest is the best way to find her, then ther's this quest that some priest and priestess go on or something to save her using the telepathic link that a god has to their priest.

Totally! But you have to get it approved first. Not sure the admins will approve of it it.

One other thing though, just to warn you, ALWAYS.PICK.ACTIVE.USERS.FOR.QUESTS. I swear, i have one person leading a quest right now and it's been taking forever because they aren't active enough. Luckliy, I'm on here everyday, so it's no issue. Just a warning.

Hahaha, it's your idea, not mine. I just helped a bit :P

First and foremost, congratulations on getting to the status of Level Five user :) Next, I'd like to ask if you participated in our Adopt a Newb program. By participate, I mean, were you "adopted" by anyone during your time as a newb? If you were, kindly tell me who adopted you so I can note it down :)

Is your character, Charissa Granville, still the priestess of Nyx? If not, please remove her from this page.

Will you happen to need the less active status? You've gone over 2 weeks with no edit and there is no notice that you are on vacation or have anything that will prevent you from getting on the wiki. If, by the 4th of February, you have failed to make an edit or/and inform someone of your inactivity, your character(s) will be deleted. In addition, until you have made an edit, you will not level up any further. This means that you will remain in the same user level and will thus have the same amount of char spots even if you've been here for quite some time now.

Alright, as of now you're officially semi-active. However, if you have a feeling you're going to be unable to edit in the near future, I'd recommend going officially inactive instead.

re hecate and guns

You '/can/ change but my experience, spots in Hecate fill up fast, so by the time you do all the work to change it could easily be full again.

As far as guns, yes they are allowed in back stories, just not literally and currently at camp (makes it easier to balance powers and weapons if we avoided any really new age weapons like that) If anyone gives you a hard time about it in your claim, link me and I'll take care of it.

From what I can tell, your characters weren't deleted, considering that you were already marked as "officially inactive". If you have a character that was deleted or archived though, kindly tell me the name and the cabin s/he belongs to and I'll fix the issue right away.

Congratulations on making it to one year with the wiki! We hope to have another great year with you

Retrieved from "https://camphalfbloodroleplay.fandom.com/wiki/User_talk:Jacksper?oldid=1479691"
Community content is available under CC-BY-SA unless otherwise noted.