Venus Bellerose @rocketnumbernine Follows you Daughter of Themis • Champions Of Othrys • The Killer Bride
The bed feels warmer, sleeping here alone. I dream in color and do the things I want. The Spire Joined January 2018 76Following 539Followers

Venus was, for a lack of a better term, a ball of sunshine and positivity. She went through some terrible things in life, but she stayed bright and optimistic through it all. She's intelligent, curious, and passionate, and she was friend to all. Everyone knew her and could approach her, and she was lively and cheerful and wanted to make everyone happy.

When it came to practicing law, Venus was ruthless to her enemies and would make sure that she is always on the right side of justice. She was a meticulous litigator, and her intellect would shine whenever she stepped foot in court. People adored her and her rival lawyers feared her. That's how good she was.

All good things come to an end though, and after discovering that her fiancé had been cheating on her and found him having sex with someone else on their wedding day, something inside Venus ticked, and she was like a completely different person afterwards.

Her personality and attitude was greyed out significantly, and she became cold and ruthless. Even her moral compass took a turn, and stopped caring about the law, only about the justice that she believed she deserved. She became less emotional, and more reserved, the complete opposite of what she once was - energetic and rambunctious.

Nowadays, she would prefer to keep to herself, and would only talk if it's required, or if the topic interests her. She had a complete transformation, and well, no one can really blame her.

Arthur Bellerose was one of the most promising young litigators of his time. He worked for the Los Angeles District Attorney's office as the assistant DA, and went on to win big criminal cases for the government. This, and the fact that he was considered as one of the most eligible bachelors of LA at that time, is what attracted the titaness of divine law and order, Themis, to him. The titaness disguised herself as the feisty lawyer, Kim, who works for a firm. They went head to head in court, and she dealt Arthur his first loss in a long time. Arthur was left intrigued, and he decided to pursue her. They both started dating, and well, one thing led to another, and eventually, Venus was born.

Arthur was happy, but he didn't understand what came to happen next. Kim disappeared, without saying as much as a goodbye; she just vanished into thin air. He was left to raise Venus alone, and his uptight schedule at the office didn't give him enough time to do so alone. And so, he asked to be relocated to a different DA office and was brought to Portland, where he and Venus came to live in.

Vee, as she liked to be called, had a rather normal childhood - unaware that a life of constant danger and attempting to avoid Greek monstrosities will soon befall her. She grew up as a prim and proper young lady, who did well in school and had dreams to pursue law just like her father. Arthur made sure to give her anything that would make her life pan out well, being the only reminder he had of Kim - his one true love.

One night, when Vee was 14, a terrible thing happened. A hellhound caught a whiff of her scent, and it followed her home. She was sleeping, but the sound of the beast trying to break into her room was enough to wake her. She screamed in terror, and her father, who was also in the house at that time, came to her rescue. He wasn't a clear sighted mortal, so all he saw was some sort of a mountain lion. Still, he was enough of a distraction, and this allowed Venus to escape. She cried as her father got ripped to shreds, but she knew she had to keep running. She sprinted through the dark suburban streets, screaming for help, but no one seemed to hear her. The hellhound soon caught up with her, and she thought that she was finished, but before it could tear her apart, a celestial bronze arrow was suddenly protruding from the beast's neck, and it exploded to golden dust. A 16 year old guy then walked up to her and introduced himself as Marc, a demigod son of Eros from Camp Half-Blood who was in the area for a quest and heard Vee's screams.

Marc had explained everything Vee needed to know about the world of the gods, and although she was hesitant to believe at first, her experience spoke volumes to her and it led to her acceptance. After Marc's quest was done, he and his group brought Vee to Camp where she was claimed by Themis and started living there because she had nowhere else to be.

Venus took her training seriously, and used her father's sacrifice as a motivation to become better at everything - fighting, using her powers, etc. Her hard work and passion eventually led to her gaining the Head Counselor position of her cabin, and soon after that, she started a romance with Marc, the guy who saved her. They became an item and was known as one of Camp's power couples. When Vee turned 18, she was given permission by Alexander to live in New York City with Marc so she could begin studying law and fulfill her lifelong dream. In a way, this was also her tribute to her father, who was an elite lawyer himself a long time ago.

Vee graduated with flying colors, and topped the bar exams. She made it to newspaper headlines as one of the youngest and most sought-out lawyers of all time because of her intellect and skill. She started working on a top-tier firm in Manhattan, and lived on a grand apartment with Marc, who, after being in a four-year healthy relationship with Vee, decided to propose marriage. Vee happily accepted. She was 22 and was on top of her game. What could possibly go wrong?

It turns out, everything went wrong. Their wedding was scheduled a year after their engagement, in a beach in the Hamptons. During that period of time, Aphrodite, the goddess of love, was feeling particularly bored and wanted to shake things up. Venus and Marc's cheeky love disgust her, especially because she had nothing to do with how their relationship developed. And so, being a petty goddess, she set out to destroy their relationship. She made Marc fall in love with other girls - multiple ones at the same time. And because of this, he started cheating on Venus, making love to other women behind her back. On the day of their wedding, Venus went to check up on Marc to tell him how much she loved him and how he was her universe, not caring about some crazed old superstition that it would bring bad luck. This would prove to be true, however, when she opened the door to Marc's room and found him having sex with a daughter of Aphrodite - one of her bridesmaids even. At that moment, all Venus could see was red, and looking back, she would say that that was the darkest day of her life. Not just because of what happened, but because of what she did.

She took out her katana that she always keeps with her, and without hesitation, sliced open a fatal wound on the girl Marc was having sex with's midsection. She died immediately, but that didn't stop Venus from continuously hacking through her body until there was nothing left but a big gorey mess of blood and body parts. Marc knew he fucked up, and fled while Vee was busy. He hopped on a plane and flew to Mexico, hoping to escape his ex-fiancée's wrath. Vee, as a daughter of Themis, had a sudden thirst for justice, and that's when she knew that she would stop at nothing until she successfully kills Marc for betraying her, her feelings, and for the injustice he dealt to her.

She left Camp heartbroken, but with a burning passion for vengeance. She tracked Marc down and found him on a strip club, flirting with the prostitute girls in Mexico City. When she revealed her presence, she saw the color drain from Marc's face, and she immediately drove her katana through his torso, instantly ending his life.

While on the way there, however, she was stopped and discovered by Hunter Steele, a council member of a new emerging organization of half-bloods - The Champions of Othrys. Because she was a daughter of Themis, she passed the criteria for what they were looking for in members. Intrigued by the ideals of the group, and also fueled by her hate for Aphrodite, Venus decided to join them, despite not really caring about bringing the Titans back to power. At this point, her attitude and personality had significantly greyed out, and she cared for very little. But she needed a place to stay, so she remained in the Spire. Under Hunter's tutelage, she started training more intensively to hone her skills and officially become an assassin for the Champions.

Powers of a Child of Themis: 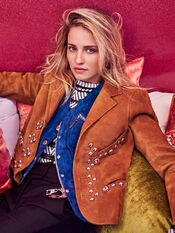 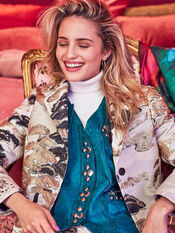 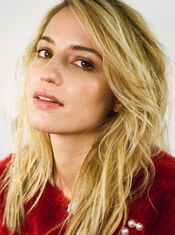 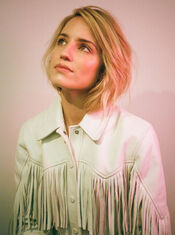 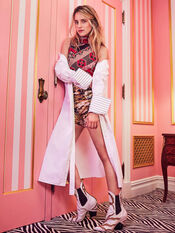 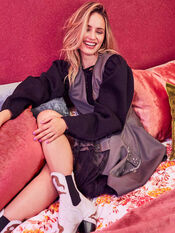 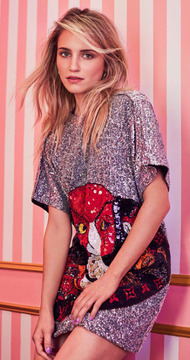 Retrieved from "https://camphalfbloodroleplay.fandom.com/wiki/Venus_Bellerose?oldid=1807061"
Community content is available under CC-BY-SA unless otherwise noted.