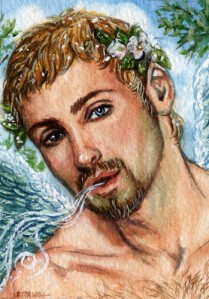 ZEPHYROS (or Zephyrus) was the god of the west wind, one of the four directional Anemoi (Wind-Gods). He was also the god of spring, husband of Khloris (Greenery), and father of Karpos (Fruit).

In Greek mythology, Zephyrus is one of the four gods of the wind. In particular he's the god of the west wind. Zephyrus was born from Astraois and Eos, and was the first wind god. Hee was married to Iris (Goddess of Rainbows) and had many children with her. He is an incredibly powerful divine being, as she was a Wind.

Zephyros' most famous myth told the story of his rivalry with the god Apollon for the love of Hyakinthos. One day he spied the pair playing a game of quoits in a meadow, and in a jealous rage, struck the disc with a gust of wind, causing it to veer off course and strike the boy in the head, killing him instantly. Apollon in his grief, then transformed the dying boy into a larkspur flower.

Zephyrus is the Greek word for west wind. This god had many cults around Ancient Greece and Rome. The West Wind's largest temple was in Rhhodes, Greece; but had a large statue and alter in Lakiadai.

In Roman mythology Favonius is the god that held dominion over plants and flowers. The name Favonius, meaning "favorable", was also a common Roman name. 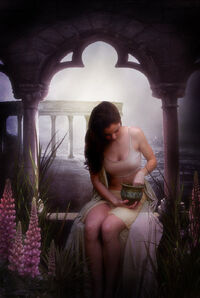 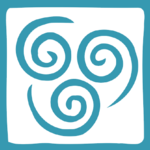 The god of the West Wind also played a role in mythology as the father of the immortal horses Xanthus and Balius. This magnificent pair of horses belonged to the Greek hero Achilles. The legend of their birth follows: in one version of the story, the Harpy Podarge was grazing in a meadow in the guise of a horse. Zephyrus, also in the form of a horse, mated with the lovely mare and their offspring were born in this equine shape.

Zephyrus is also always depicted as the calmer of the winds and is often asked and prayed for by sailors for gentle sailing wind. He is held in high honor by all who travel the sea along with Poseidon for being the gentle wind that guides sailors across bad waters.

Zephyrus is the calmest of the four wind gods and is always depicted as a kind and loving god. Though he is sometimes angry and reacts badly to change (see The Love of Zephyrus & Hyacinthus). He is shown to work kindly with Demigods and Mortals giving them good wind to sail. He is a loyal servent for Eros and because of this he usually feels pity for ones desperately in love and loves to help them out and he was helped by Eros.

He is usually depicted wearing a white toga or showing his chest and usually has curly brown or golden hair. He wears sandels on most occasions and wear an olive branch crown much like the Roman Emperors. Around his toga he wears a belt made of sheeps leather. He is sometimes depicted to carry a bag of fruit to bring in the Spring.

H is an extremely powerful god. He is also highly respected as a god by mortals and others of his kind.

Retrieved from "https://camphalfbloodroleplay.fandom.com/wiki/Zephyrus?oldid=1429811"
Community content is available under CC-BY-SA unless otherwise noted.